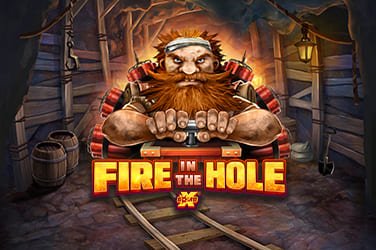 Players will be hoping to strike gold in this new and exciting take on the mining genre of slot games, developers No Limit City have re-written the conventions on this one. This slot is as volatile as the explosives in-game so players can expect excitement with every spin and there are a few bonus features to stick your pickaxe into here so let’s get digging.

Behind the 6-reels on play here there is an old-fashioned mineshaft curving off into the distance, the walls are held up by wooden support beams as oil lights illuminate the scene. There is other mining apparatus littered against the walls from barrels and shovels to cotton sacks, a dwarf-like character with a big ginger beard brings sticks of dynamite to the game. The reel is held up with wooden beams similar to the background as the payways and multiplier is visible from wooden boards above the reels.

The symbols players can use here include the lower value 9 – K cards, a peculiar choice over the standard 10 – A, the highest return here is 0.30x the stake however there is much, much more. You can also find a pickaxe, rope, boots, backpack and oil lamp with the latter offering a decent 1.5x, there is also an Xbomb Wild symbol and a Scatter rock of gold. Other symbols can come into play during the Lucky Wagon Spins bonus, but we’ll get to them.

The first feature we will mention is the Collapsing Mine which is very similar to cascading reels that are included in many slots. At the start of each spin there are only 3 rows active, with each collapse an additional row is added up to 6; to trigger a collapse players need only to land a winning combination. Alternatively, the Collapsing Mine feature can be activated by an xBomb explosion or during the Wild mining feature. After a winning combination is made the symbols are removed with new ones being added from above offering more chances to win and unlock all 6-rows, there’s a breath-taking 46,656 ways to win available.

During play the xBomb Wilds substitute for any main game symbols to complete wins, when a win is triggered with the xBomb or not if there’s a symbol on the grid it will explode. They also explode if there is no win so long as the Wild mining feature is not active. An xBomb explosion removes all regular symbols adjacent to it and adds an x1 multiplier for the next one.

The Wild Mining feature is triggered by 3, 4 or 5 matching symbols typed landing horizontally but not in a winning combination. The triggering symbols are replaced with 1, 2 or 3 Wilds, all other symbols in the area explode and a new collapse is triggered,

The Lucky Wagon Spins bonus is triggered by Scatters with the number of rows to play with determined by the number of Scatters that triggered the feature. This feature starts with 3 free spins with a further 3 added every time a coin symbol lands, these coins unlock the prize or modifier above the reel on which it lands. These are:

Finally Collect chests active beneath the reels and collect all coin values above them on each spin, similar to a hold and win feature in other slots.

There’s certainly a lot to talk about here with the bonus features more than makeup for the standard wins in the main game. The mining setting has been done excellently here with all the symbols, features and wins staying relevant.

Head over to our slots page for a huge selection of games like Twin Happiness or 88 Fortunes.