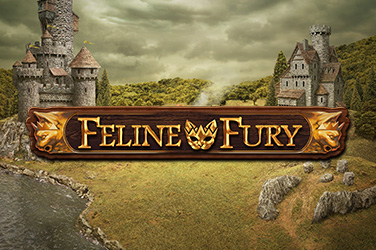 Usually we can’t wait to describe the look and feel of a brand new pokie to you, but we have to admit we’re a little lost for words with this one! Feline Fury is an adventure like no other, combining pirates and knights and wizards all into one place, but entirely starring cute little cats in the big roles! There must be magic in the air for this to happen, but you’ll have to come with us on a dangerous journey with these fearsome little kitties if you want to find out what’s going on. Let’s go, in our Feline Fury slot game review!

Whatever these cats are up to it sure looks cool, with enough gloomy castles and flame red skies behind the reels to make a thrash metal album. It all gets a little cuter when you see the cats that make up the high value symbols, taking on the usual roles in a high fantasy adventure with their cute and furry little faces. There’s a wizard cat, a knight cat, a captain cat, a pirate cat and a bard cat, which combined with the hilarious little animations such as arrows hitting the screen and the bombastic soundtrack that contrasts with the cute little cats, there’s a lot to smile about in Feline Fury.

There’s also plenty to like about the mechanics in Feline Fury, which offers a fairly typical five reel and three row layout, as well as 20 pay lines to play on where you can bet a maximum of £/€/$100. There isn’t a huge amount more to talk about in the main game, where the top paying prize is just 10x your stake, and it’s really just a waiting room before you get into the features though there is a crown shamed wild that can perform the usual substitution duties. With an RTP of 96.2% you’ll be playing with better than average odds, but a bit of help from the bonuses is always nice!

A couple of the bonuses are triggered randomly and escalate quickly. The first is the feline wilds feature, which turns up to four of the cat symbols into wilds, during which time you can also get five reels that are outlined in fire. If any of the cat wilds land in the fiery reels then they take over the whole reel, and each reel taken over adds to the multiplier you play with up to 5x. A second bonus is activated during the free spins, which you can start by collecting three or more tuna tin holy grail scatters. In this game you want to try and collect 12 of each card suit landing on the reels, with each full set of suits gathered activating one of the cat wilds. Once you do this you can also get the flaming reels feature mentioned above going, meaning your free spins will be full of multipliers and stacked reels too. You can even add to your free spins with a new spin each time a scatter lands!

We have to give the Feline Fury slot game developers credit for a mad bit of design, and we love all the excellent little touches like the animations and the tuna tin holy grail. We also can’t fault them in their gameplay choices because while the main game isn’t all that great, the flaming reels and the cat wilds are addictive to try to get. Plus, they’re super rewarding when you do!

If you want to turn your winning fury to another slot, you may like Ankh of Anubis, Wild Frames, 7 Sins and Hugo’s Adventure.