Home » Playngo » Eye of the Kraken 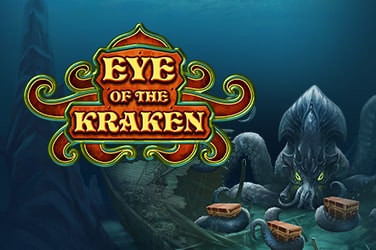 This slot game will have players journeying to the deepest depths on the hunt for monsters, this giant Kraken is lying in waiting to drag you down to Davy Jones locker in this atmospheric slot.

Will you be able to survive the treacherous ocean and find the treasure of the sea floor? Or will you become dinner for this giant squid? Let’s have a look at this slot.

With its dark and murky undersea world that lies behind the reels, Eye of the Kraken is a voyage into an adventure novel in itself. The symbols are contained within steampunk submarine-esque slots to give this game more depth. The reels are full of shiny brass and lover value symbols like weighted boots, compasses, harpoons oxygen tanks to make winning combinations. The higher value symbols consist of the ships crew: the captain, first mate and engineer. Eye of the Kraken has interesting animations for when the squid attacks and an orchestral soundtrack to add tension.

An unusual feature for modern slots, Eye of the Kraken works off a 3-reel, 3-row mechanism that offers 8 paylines on which players can get symbols. The relatively high betting limit of £/€/$100 along with a main game return of up to 1,000x the stake with a row of 3 captain symbols makes for exciting play. As you only need to land 3 of each symbol to score a nice return this slot makes it easier to win something which is great news for players. This results in an enticing RTP (Return to Player) of 96.41% which proves the possibility of huge payouts if players are willing to take the risk.

The Eye of The Kraken slot game packs some bonuses too with its deep-sea adventure. With tentacles that have an almost magnetic pull and can turn any symbol into wilds, this bonus feature occurs at random during gameplay and can help players to make the most of a spin. The Scatter symbol in Eye of the Kraken is a diving helmet, landing 5 of these across the reels will begin another bonus round that adds 2 extra Wilds to the reels and provides 9 free spins that could offer random prizes and regular wins. Along with these there is a 3rd bonus round that begin when players have collected 50 torpedo symbols in the main game. This lead to a final showdown with he Kraken, sat above its pile of treasure, players will get to choose 3 of 7 treasure chests and claim the random prizes inside.

The setting and narrative of this slot is brilliant and immerses the player into this sea-faring voyage. The bonuses are rewarding and main game returns high enough to please any players with a high betting limit that would secure huge returns.

For more games head over to our slots page with releases from the creators of Eye of the Kraken, Play’n Go and many other favourite slot games such as Book of Oz.