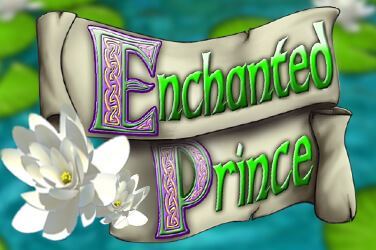 Enchanted Prince is a fairly simple slot from Eyecon, featuring a wholesome fairy-tale theme. Established back in 1997, Eyecon blend science with creativity to produce high performing games which players are guaranteed to enjoy, whatever their experience level.

However, Enchanted Prince seems to be enjoyed less than many of their games, due to its lack of special features or multipliers.

With an RPT of 94.9%, the game is designed using Eyecon’s standard 5 reels and 25 paylines. Players can bet as small as 25p, or can increase this to $/€/£12.50, meaning this slot is ideal for beginners who don’t want to break their bank accounts. There’s no major jackpot, but plenty of opportunities to win small. If you’re on a small budget or enjoy the little wins in life, Enchanted Prince may well be the game for you.

While the fairy-tale theme is a nice idea, the slot features a fairly basic design. The game is set against a simplistic pond background with reels including playing cards alongside a white flower and a lily pad. These features can result in an award of 800 coins. You might also see a red gemstone that can give you 1400 coins in winnings, and finally a castle, which increases your coins to 1800 when found in the correct combinations.

What you’re really hoping to see is the princess, a standard symbol that rewards 10, 100, 500 or 2,400 coins if you land 2, 3, 4 or 5 on a pay line respectively. If you’re lucky enough to see the wild symbol – an impressive crown – your payout will be doubled. The wild substitutes anything except the scatter symbol, which comes in the form of a frog (more on this later).

Unlike many of the more exciting slot games, Enchanted Price doesn’t offer any special multipliers, a fact which proves rather disappointing to many players. However, it does have a free games feature, which is triggered by landing 3, 4 or 5 frog-themed scatter symbols. This has to be done on the same spin, but can be anywhere on the reels.

Landing enough scatters can also gain you retriggers, which can eventually result in 400 free spins.

Enchanted Prince is a fairly standard game, with no special features to write home about. The free spins round can be useful, but it would be nice to see a little more excitement. Saying this, if you’re looking for some simple gameplay and the potential for small yet exciting winnings, this slot definitely does the trick. It seems to promote the fun factor rather than a professional slot experience, so if this is your scene, Enchanted Prince won’t disappoint.