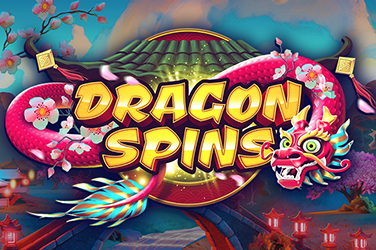 Slots with an Asian theme, and pokies with a dragon theme in particular, are some of the most popular slots on the market right now. The booming Chinese gaming market and the popularity of the dragon as a potent symbol of good luck have both contributed to this, but it has also resulted in developers getting a bit lazy. Just paint it red and slap a dragon on it and you’ve got a new slot game! But that’s not how Dragon Spins rolls. Cool graphics and an interesting art style makes this slot a cut above the rest design wise, but does it pay well too? Let’s take a look in our Dragon Spins slot game review.

We can’t say that Dragon Spins has broken the mould with this slot, and there are still plenty of elements you’ll recognise from many other Asian themed games, but the art style and the quality of the 3D graphics is better than most games you’ll play. The background to the reels is a gorgeous twilight vista of a sleepy Chinese village beneath some cliffs, with lanterns burning and blossom laden trees dotted around. The reels themselves are ornate, with gold carved detailing on each corner, while the low value symbols are the standard 9 – A picked out in colourful calligraphy brush strokes. The high value symbols are a collection of lucky items including the koi carp, the lucky tortoise on a pile of cash, a Chinese lantern and a dragon medallion. Alongside a traditional soundtrack there are a number of cool sound effects and little animations to bring the game to life.

The layout of the Dragon Spins slot game is pretty traditional so there aren’t too many surprises there, with five reels and three rows to play on. One interesting feature is the high betting limit, which allows you to bet a whopping £/$/€250 per spin, so you can really make the most of those wins which can come as high as 500x your stake in the main game. This pokie is listed as a high volatility game, so expect some barren patches as you play, and this results in an RTP that’s a hair above average at 96.01%. Don’t worry though, because the bonuses can seriously perk your ambitions up if you’re lucky!

The bonus in Dragon Spins is super exciting because of the awesome multipliers it promises, and it can be activated simply by landing three dragon medallions on your middle three reels. With this achieved you get five free spins during which your multiplier doubles with each spin, maxing out at 8x on the fifth spin. You can add to the number of spins by landing extra medallions during the bonus, gaining two extra for each medallion, and the multiplier will keep increasing all the way up to 300x – a truly huge figure. This means the maximum potential win is 9,290x your stake, a really large sum when you remember the high betting limit!

Dragon Spins is a great looking little pokie that does an established theme really well, but the best part is definitely those awesome free spins. The main game is a little dry without much interesting going on, but if you can manage a run deep into those big multipliers, then the sky’s the limit for your prize!