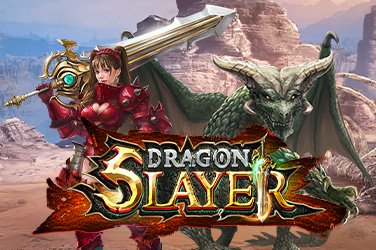 In this Dragon Slayer Slot Game Review, we will look to inform potential players and bettors of the following key information before they begin playing the game; how the general gameplay works, what the RTP (return to player) rate is, if there are Dragon Slayer Bonuses to speak of, and if overall this is an enjoyable slot game to play.

This is a slot game produced and designed by Simple Play. They are one of the top names in the industry, and have been making good quality slots for a number of years. Dragon Slayer is no different, as the whole game has been made with a lot of care and attention, with everything from the background to the symbols having been well drawn.

The gameplay itself is fairly easy to grasp, as it is the standard three rows and five reels that most online slots have. There are 243 active paylines and the aim is to land at least three of the same symbol, to trigger a payout that can be potentially rewarding to players spinning the reels of this online slot game.

Each symbol has been assigned a different value, so you’ll receive a different payout depending on which ones you match. The playing cards (tens, Jacks, Queens, King and Aces) are worth between 2x and 30x your original stake. From there, the maiden and the knight symbols are worth slightly more, landing three of each of these is worth up to 5x your initial bet, while landing five of them is worth up to 75x.

The most valuable by far is the Dragon himself. Landing five of these across the reels is worth an impressive 125x your original stake.

What kind of Dragon Slayer Review would it be if we didn’t cover the bonuses? The Wild symbol is the Dragon banner, which will replace all other symbols (excluding the bonus icon) to complete successful combinations.

The Hatching Dragon Egg feature begins when the egg symbol lands. It will expand upwards, filling the lines with Wild symbols.

There is also the Epic Dragon Repins, which is activated when Dragon symbols cover the whole first reel. You’ll be given three respins to begin with, but this can increase to a maximum of 20 if any additional Dragon symbols appear.

The RTP rate for this slot game is around 96.05%, so slightly lower than some of the other slot games we’ve reviewed recently.

We really enjoyed this slot game from Simple Play. It is attractive to look at, and a lot of fun to play. Throw in the Dragon Slayer Bonuses, and you have all the ingredients for a great slot.