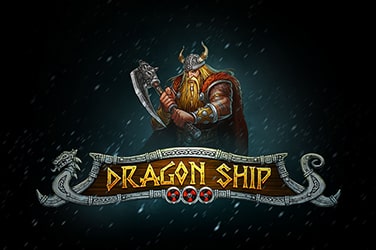 If you’re reading this review there’s a good chance that you decided that playing pokies is a good way to spend your spare time and make a bit of extra cash, but if you lived in the 9th century there’s a good chance you’d have slapped on your helmet and jumped aboard a ship in search of treasure instead! Dragon Ship takes us back to those bad old days of fierce Viking raiders setting off in search of plunder, and you’ll be joining them on the hunt for adventure and a wallet full of cash. So will you get rich or will you get sunk? Let’s take a look in our Dragon Ship slot game review.

The Dragon Ship slot game certainly looks the part, and thanks to a lot of detailed graphics this game manages to set a very atmospheric scene. The background to the reels is a bleak view of the iron grey North Sea as it must have looked when the Vikings set out on it all those years ago. The reels are surrounded by fearsome, carved dragon heads and the dividers between the reels are lengths of rope, attention to detail which continues throughout this slot. On the reels the low value symbols are the standard 9 – A but richly carved and decorated in the style of ornate Viking runes, while the high value symbols include a scary Viking in a horned helmet alongside axes, carved shields and the carved dragon on the prow of a ship breathing fire. There’s even a little animation at some points in the game as a ship sweeps past in the background in the teeth of a storm, with huge waves and lighting crashing all around.

The mechanics of Dragon Ship are pretty traditional, with five reels and three rows to play on where the maximum bet is just £/$/€18.75 across the 30 pay lines you get. Thankfully the symbols themselves are pretty well paying, with even the low value symbols paying 100x your stake for five, while 250x, 500x and even 2500x are the maximum payouts of other symbols you’ll encounter. There is also the dragon figurehead of the longship which acts as this game’s wild and can land stacked, enhancing the chances you’ll land a big total. The RTP is very low at just 94%, though, so you’ll have to hope you can land some of those big combos!

To help with that there are a couple of bonus games to sink your teeth into, a free spins and a pick and win game. The free spins are activated by landing the aforementioned wild completely stacked on reels one and five, which grants you 15 free spins with those two reels remaining wild throughout. This is when the storm picks up, and your poor boat gets tossed about in the background! There is also the pick and win activated by landing three treasure chests, which simply lets you choose between them to win a random cash prize.

Just like a real Viking raid this pokie is high risk and high reward, and you’re just as likely to end up on the bottom of the sea as you are to end up with armfuls of gold. However, some excellent graphics and some fun bonuses make Dragon Ship worth the risk, and you’ll have fun however your fortunes turn!