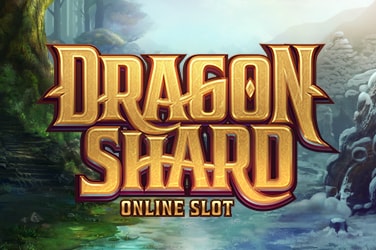 We’re always happy to see developers put a little effort into their pokies rather than churning out the same old stuff time and again, which is why we were excited to play Stormcraft’s fantasy epic Dragon Shard, where you’ll aid the forces of summer or winter who fight over a magical stone. It’s got a typical swords and sorcery style story to enjoy, as well as some top class graphics and design, but is this slot more than just a pretty face or is it rather lacking in the treasure department? Let’s take a look in our Dragon Shard slot game review.

On the face of it Dragon Shard is a very typical fantasy themed pokie. The background to the reels is a lush looking fantasy setting formed of a steep sided valley in which there lies a ruined castle, while there is also a waterfall and an ominous looking wood in the distance. The symbols themselves are either the card suits in jewel form for the low value icons, or a series of fantasy objects in the high value icons: The dragon shard itself, ice dragons, fire dragons and the Queen of Fire and the King of Ice themselves who can appear stacked whenever they land. Alongside these cool visuals are atmospheric sound effects and a haunting soundtrack, so everything happens with the clash of steel or in gouts of flame or frost.

The first thing to notice about the Dragon Shard slot game is that it’s got five reels and five rows, which is more than usual, and forms a square grid to play on. There are still only 40 pay lines, but it gives you that little extra chance of winning, and you can also choose to bet up to £/$/€200 if you really want to make the most of your luck. The game’s logo is the wild, which pays the most at 20x your stake for five, which isn’t a huge amount, but enough to keep you ticking over until the bonus rounds. With an RTP of 96.41% you can be sure that there’s cash to be won, but you might have to wait until the bonuses to get it.

The bonus rounds introduce you to mystery symbols, which are dragon symbols that transform into the same other symbol when they land on the reels. The bonus games in Dragon Shard are activated by landing three or more of the dragon’s eye scatter, and depending on how many scatters you landed you’ll be given between one and three mystery reels, which are just reels on which mystery symbols can land. It’s not unusual for these reels to fill up with mystery symbols, which guarantees you a win, and with a bit of luck you can create some really big wins by landing five high value symbols in a row this way. There’s even the possibility that this will make the whole screen wild, which will pay out the biggest potential win of 800x your stake.

Dragon Shard is a really cool looking game that is engaging and enjoyable to play, and happens to have some great prizes up its sleeve as well. The main game’s prizes are a little disappointing, but there’s nothing negative about the potential of the bonuses, which can be big thanks to those mystery symbols.