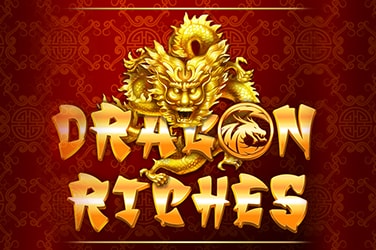 Dragons are a popular motif for pokies with Asian themes, and they can give you greater good fortune or literally eat your luck away depending on how you treat them. One of the main reasons they are considered lucky is because they have the attributes of all the other signs of the Zodiac, such as the snake’s body and the rat’s whiskers, so it’s always their lucky day no matter what year it is! So will Dragon Riches bring you the fortunes of the gods, or will he swallow all your luck? Let’s find out in our Dragon Riches slot game review!

Dragon Riches is a very traditional looking pokie with a Chinese theme, dripping in red and gold as you might expect with all kinds of traditional symbols thrown in the mix. The background is deep red with a traditional geometric pattern on the background, while the reel borders are flanked with carved dragons and traditional Chinese lattice designs. The low value symbols are the standard 9 – A in a stereotypical Wonton font, while the high value symbols include traditional bound coins, a laughing Buddha, a golden dragon, a stack of ingots and glowing lanterns. There are some cute little animations and a traditional soundtrack, but nothing that will blow you away.

The main point of interest in Dragon Riches is the 243 ways to win mechanic, which adds a little excitement to the standard five reel and three row layout, though there are also a ton of options when it comes to your betting amount. You may have noticed that the high value symbols come in both silver and gold form, and you can choose which symbols you’d like to have land in their golden form, from the lowest value gold ring all the way to the highest value gold Buddha. There are up to five, and choosing fewer gold symbols does mean you can wager less, but it also means you’ll win less too. The most you can bet is £/$/€88 per spin with all five gold symbols activated, at which point your RTP sits at a pretty low 95.33% So why is it so low? Let’s take a look at the bonuses.

A low RTP tends to mean a high variance slot, which is exactly what you get with the Dragon Riches slot game. There are a wild and two scatters in this game, the first of which is a key that activates the free spins and the second of which activates a pick and win bonus game. Find five keys to trigger ten free spins, or find five dragon heads to give you the chance to turn over coins and match three symbols of a kind for a prize. There is also a third potential money maker, which is a series of jackpots from mini to grand that are randomly awarded during the main game. Remember though, you can only win the top jackpot if you have all five golden symbols active!

We love a pokie that lets us play it safe or go for it, because choosing to take a bigger risk and getting a bigger reward in return is what slots are all about. The amount of choice you get with Dragon Riches, then, is fantastic. The main game isn’t the most rewarding, but there are plenty of chances to make it big in the bonuses if you’ve got the stomach for risk!