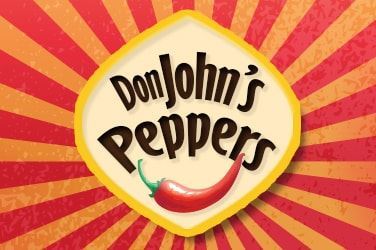 A good name can be what separates a pokie you play from a pokie you don’t, so we just had to give Don Juan’s Peppers a go, and we weren’t disappointed. Some slots have you saving the world, checking out ancient ruins or travelling through space, while some slots are content to keep the stakes nice and low: making sure Don Juan gets his pepper harvest in safely. He’s got a lazy donkey and some pesky clouds to contend with, but can you take advantage of the sunshine and grow yourself a bumper crop, or will your game be a washout? Let’s take a look in our Don Juan’s Peppers slot game review.

Don Juan looks to be living the dream of a Mexican farmer in this slot, with blazing sun shining down from above and a field full of shiny red peppers as far as the eye can see. That’s the background to the reels, and the borders themselves also look suitably rustic as if made from salvaged wood. The low value symbols are the standard 9 – A in a jazzy Mexican style, while the higher value symbols are represented by a few features of Don Juan’s life such as his lazy donkey, a bottle of tequila, a few red chili peppers and his Spanish guitar.

The Don Juan’s Peppers slot game has a few little surprises in store, most obviously the extra row that you get, with this game boasting five reels and four rows. This gives you 40 rows to play with on which you can bet just £/€/$8 per spin, which isn’t a huge amount, but luckily there’s a top prize of £/€/$24,000 to play for so you don’t need to worry that you’re getting short changed! That’s a bonus win, but the main game isn’t bad either, with 300x your stake if you manage to land five sun wilds. All in all the RTP works out slightly more than average at 96.08%, so there’s plenty to play for!

The bonuses in Don Juan’s Peppers are nice and simple but very effective, taking the form of a free spins round with the benefit of some awesome wilds. There are two forms of wild in this game, Don Juan himself and the smiling sun, and both of them can land stacked on the reels in order to generate some nice and tasty combos when combined! The chili pepper symbols are the scatters you need to land, and five of them can get you as much as 25 free spins, during which all the stacked wilds that land will become sticky for the whole free spins round. This means you can even manage to have quite a few spins with all of the reels containing stacked wilds, which is an amazingly lucrative opportunity!

Don Juan’s Peppers is a fun little pokie that doesn’t have a load of complex action to deliver but has a cute theme, and some nicely executed mechanics that can present top quality payouts. The main game doesn’t pay all that well, but you’ll soon be in the money if you can get a streak going with those stacked wilds!