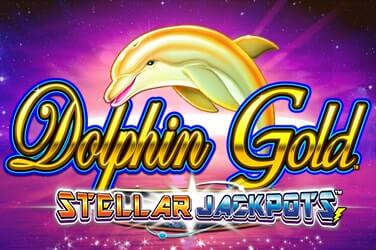 Dolphin Gold Stellar Jackpots is a Lightning Box slot from 2017. Lightning Box are a well-known slot provider who developed popular slots such as Silver Lion and Eagle Sun.

Dolphin Gold is one of their most popular slots, probably because of the Stellar Jackpots that players can win while they play.

Dolphin Gold Stellar Jackpots is set deep underwater, where beautiful marine life flourishes. Players can see gorgeous coral reefs framing the reels, while stingrays, sea horses and turtles are captured as symbols on the reels. It’s a good looking slot, and between the beautiful illustrations and the sloshing waves that can be heard in the soundtrack, it’s the perfect slot to play on a relaxing, sunny afternoon.

Dolphin Gold Stellar Jackpots is a 40 payline slot in which players line up beautiful sea creature symbols across paylines to win. The slot’s Wild is a dolphin, and not only does it substitute for any other symbol in the game, but it also pays out double wins. Other than this, the stingray is the highest paying symbol up for grabs, paying out between 5x and 500x for two to five symbols on a payline, or up to 1000x for four stingrays and a Wild symbol on a payline.

There’s a simple Free Spins round to be won if players can land between six and 12 of the blue dolphin Wild symbols, which will activate between three and 21 Free Games. During Free Games, gold dolphin Wild symbols, which only appear during this bonus round, will appear stacked on the reels, for bigger, better wins. Of course, a big reason why players play this slot is for the Stellar Jackpots bonus, which is triggered randomly and consists of six challenge levels and a jackpot level. Advance through the levels while retaining your lives to be in with a shot of winning one of three Stellar Jackpots.

Dolphin Gold Stellar Jackpots offer an average RTP of 96.32%. This is about average for an online slot, and actually pretty decent compared to many jackpot slots which lure players in with the possibility of a big win but actually have below-average returns for most players. It’s a medium variance slot, too, so players won’t have to be spinning the reels forever in the hope of landing those mega wins; payouts are fairly evenly distributed throughout the game.

We love jackpot slots, if you like this type of game then why not try other titles such as Crystal Lotus, El Jackpotto 2 and Diamond King.