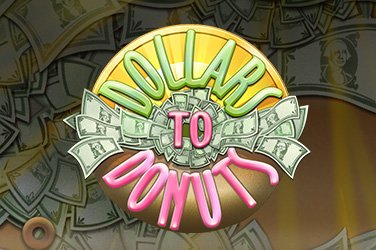 Progress is great in the world of online gaming, but it doesn’t necessarily mean we have to abandon the past. Great evidence for that is the slots game Dollars to Donuts by developer Rival, which is a classic slots game at heart that has been updated with 21st century graphics.

One of the best things about this game is the way it looks, and it’s nice to see that this designer didn’t buy into the idea that simple games have to look simple. Sure, there’s only three reels, but the graphics are brightly coloured and well designed so you won’t feel short changed. A handy paytable sits permanently to the left of the reels while the background is a dizzying starscape of donuts and dollar bills.

Befitting the title, everything here is covered in sprinkles, so to make combinations you’ll be looking out for traditional donuts and other things in donut form. The highest paying symbols are orange donut 7s, followed by purple donut 7s and then yellow donut 7s. Triple BAR symbols are next, followed by double and then single BAR symbols. Purple traditional donuts are the lowest paying unique symbols, while you can still make small amounts of cash out of any combination of the above.

You’ll know exactly the kind of slot we mean when we mention the BAR symbol, a stalwart of old style slots, but that doesn’t mean this slot is completely without surprises. First of all, unlike most traditional slots, you can bet across five lines. With a minimum bet of £/€/$0.01 and a maximum bet of £/€/$75 this means you can actually spin yourself a potential maximum jackpot of £/€/$25,000, which is not a bad day’s work no matter what time you’re from. However, with the old style mechanics comes and old style RTP of 94.30%, low by today’s standards. There’s also a wild, in the form of the Dollars to Donuts logo, which represents the highest value symbol by far and can also substitute for other symbols to complete combos on its own.

Unfortunately for fans of modern slots, the Dollars to Donuts slot game sticks to the traditional slots format and doesn’t include any bonus rounds at all. While this does have the advantage of making the game very easy to play, you just have to bet and spin, it might turn some modern gamers off simply because it’s not especially exciting.

Dollars to Donuts is truly a game out of time, and while it’s been brought up to date with some more modern design and some better graphics, it’s still a traditional casino slot at heart. This means that it’s got some seriously interesting payouts that any modern game would be proud of, but the game itself is very basic by modern standards. Whether that’s a deal breaker or not will depend on the player, and if you just want to get stuck into making bets it might not matter.