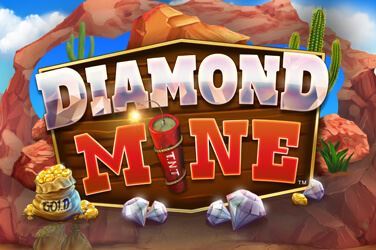 Diamond Mine is a classic Megaways slot from Blueprint Gaming and Nyx, themed around the diamond rush. Players take on the role of a miner digging for diamonds, which is a fitting theme for a slot game which offers big payouts.

This slot also features the popular cascading symbols feature, which means multiple wins can land on a single spin because winning symbols disappear from the reels and get replaced by new symbols immediately upon a win.

Diamond Mine is a Megaways slot which offers 117,649 ways to win. Players win by landing matching symbols on adjacent reels from left to right. The highest paying symbol in the game is the diamond, which pays out within 2x and 50x the stake for between two and six symbols adjacent to each other on the reels. The miner pays up to 7.5x the stake for six symbols, while lower valued 9 to A symbols pay out between 0.8x and 1.75x the bet for six adjacent symbols.

There are two special features at play in Diamond Mine. The first is a Free Spins bonus round which is triggered when players land four gold Scatters anywhere on the reels. This will unlock 12 free spins. During free spins, more Scatters can be used to trigger more free spins, but the biggest selling point of this round is the superb win multiplier: as reels cascade and new symbols fall into place, every consecutive win raises the win multiplier by one – this is unlimited, too, so theoretically it could keep climbing with many reactions. Diamond Mine also features mystery symbols which are only revealed after all other symbols have landed. All mystery symbols transform into the same symbol, making this feature a great way to increase your chances of landing a win.

Diamond Mine is a great slot for players who prefer to play on the go. It runs smoothly across both iOS and Android mobile devices, and the game’s graphics look great on any display.

Diamond Mine offers a very decent return to player of 96.43%. This means that for every $100 that players spend on the reels, they can expect to win back around $96.43 on average, although of course, many players hope to do better than this. It’s also a high variance slot, which means that wins don’t come very often but when they do, they can be big. This makes Diamond Mine a good choice for high rollers keen to win big and not advised for casual players who like to drop in and out of slots.

Diamond Mine is a good Megaways slot; there are plenty of chances to win, a decent RTP, and the slot has a nice comic theme, too. For players who like the Megaways style of play, there are few better choices than Diamond Mine, and the game’s graphics and design complement the mechanics. We’d say this slot is definitely worth a try.

Take some time to try out some of our other slots including Platooners, Flux, Blazing Goddess and Emerald Isle.