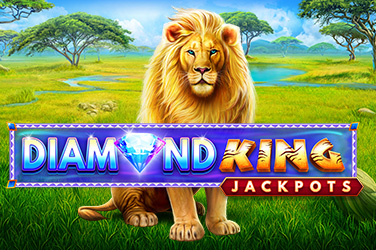 We weren’t really sure what to expect from the title of this slot, but open Diamond King Jackpot and you’ll be left in no doubt! This pokie focuses on the King of the Jungle itself, the majestic lion, as well as a few of the other creatures this magnificent beast shares its African home with. There is so much going on in this game that it’s as hard to appreciate the lovely visuals as it would be if a rhino were charging through your house, but will you come away with some of the King’s treasure or are you lion food? Let’s take a look in our Diamond King Jackpot slot game review.

The life of an African lion is firmly front and centre in Diamond King Jackpot, and there’s no doubt who’s the boss of the savannah when he’s around! The whole style of this slot looks idealized, with a lush grassland bathing in golden light behind the reels, interspersed by idyllic pools of fresh water and animals drinking. The lion itself sits to the left of the reels, while the symbols themselves are a mix of the standard nine to ace images for the low value symbols, and a variety of savannah animals for the high value symbols: Giraffes, Elephants and the Lion itself!

One of the best things about the Diamond King Jackpot slot game is that it features an amazing 1024 ways to win mechanic, and while that means that the top bet is pretty low at £/€/$25 per spin, it does mean that you can expect wins to land thick and fast as you spin! There are five reels and four rows in play, and with a decent RTP that’s above average at 96.4% you can be confident you won’t be short changed. But there are lots of other things on the reels we haven’t talked about. What’s the diamond meter for? How much are the jackpots? Let’s take a look.

The key to the bonuses in this game is the diamond wild, which crops up in the regular game and substitutes for other symbols to create combos. As well as that however, the diamond wild also pays out a 2x multiplier if it lands in the power zone, a flash name for the square in the middle of the screen. This power zone expands during the free spins round, activated by landing up to five road signs in exchange for up to 20 free spins, and takes up all three middle reels. You can also expect the diamonds to attract multipliers of up to 5x when they land in that new, expanded power zone. Finally, as an added boost, every diamond you land is collected to build the diamond meter, and when it’s filled you can play a pick and win game for a max prize of 5000x your stake! If you’re feeling lazy though, you could always just wait and see if you’re randomly awarded the big random jackpot, which is also worth 5000x your stake.

Diamond King Jackpot is a great looking pokie, and while the game itself doesn’t seem to have much to do with its theme we can’t fault the designers’ effort. There are some amazing prizes in this game, and the diversity of bonuses they came up with is simply breathtaking!