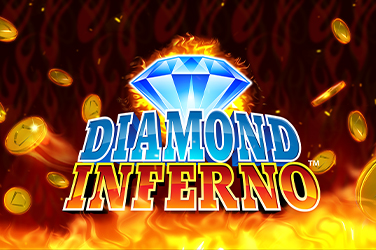 Classic pokie machines might look a little old school these days, but there’s still plenty of appetite for a simple spin on a fruity rather than any of the more sophisticated slots that you find online. Diamond Inferno is an attempt at blending the two, bringing together those fun and classic elements we know and love from the good old days, along with some fun and high tech mechanics from modern slots. So will Diamond Inferno raise your temperature, or is it just old fashioned? Let’s take a look in our Diamond Inferno slot game review.

There’s nothing at all subtle about Diamond Inferno’s theme, in which bright red flames lick at the sides of the reels as you play and make the whole thing look red hot! It’s a fast and furious game in which anything is liable to catch fire, including the symbols and the reels themselves, so watch out! Speaking of the symbols, there are a lot of icons you’ll recognise from traditional fruits on display here, including the standard 9 – A and higher value symbols like the gold bars, the BAR, dollar sign, lucky 7 and lucky dice.

The Diamond Inferno slot game is built around a novel little mechanic that’s a bit like cascading reels, but instead of giving you a higher multiplier, stringing together wins gets you more ways to win instead. There are always five reels, but win twice in a row and you get an extra row that pushes you up to four, win three times and you get five, and finally you can get as many as six. That means a nicely expanded 50 pay lines, on which you can bet up to £/$/€20. The trade off for this is that the symbols themselves don’t pay all that much, with the very maximum you can win in one spin sitting up at 100x your stake for five stars, though the RTP is above average at 96.14% so there is definitely cash to be won.

Diamond Inferno is a game built around its bonus feature in the main game, but on top of that strange reel expanding mechanic you also get a set of multipliers to play with if you expand your rows to the maximum. Win four more times on top of the three times it took to expand the reels to maximum and you could be playing with a whopping 10x multiplier! Though you only get one spin at this level before you get reset back to the start. There is also a scatter in this game that looks like a diamond, which pays out up to 20x your stake for landing five anywhere on the reels, which is a nice little addition.

Diamond Inferno is a fun, simple pokie that is based around a single game mechanic, but it’s a lot of fun to play. You don’t have to think too hard about the game, and you’ll be hoping for some good luck in the bonuses, but with a potential jackpot north of 11,000x your stake there’s plenty to play for!