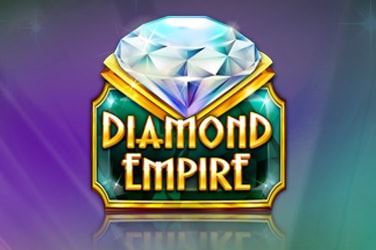 Diamonds have always been some of the most valuable and sought after precious stones in the world, where a stone the size of a fist can be worth more than a king’s ransom and wars have been fought over the mines they’re extracted from. Nothing symbolized the power and excess of the Gilded Age better than diamonds, each one brought in from far flung corners of the world’s empires and costing more than a normal person earned in a lifetime! Diamond Empire tries to capture that spirit of pure luxury with trippy visuals and gorgeous art, but are you ready to take your place in high society, or will you be turned away at the door? Let’s take a look in our Diamond Empire slot game review.

Diamond Empire is a striking looking pokie that will make you look twice thanks to its strange, sickly green art nouveau inspired background featuring a beautiful young woman in a long ball gown. The effect is stunning, something that’s carried over to the reels themselves which sparkle and shine in a kaleidoscope of colours just like a real diamond. The symbols are a bit less classy, just your standard fruit machine icons, including cherries, BAR stacked up to three times, the lucky 7 and sets of diamonds with multipliers attached. The visuals can be very trippy as the screen shimmers and sparkles while you spin, added to by the offbeat jazz soundtrack that changes to suit the action as it unfolds.

The Diamond Empire slot game is a little unusual, with just three reels and three rows creating a six by six grid to play on. This means you only get 25 pay lines to play on, but it also means you don’t have to collect as many matching symbols to win the top prizes. The maximum bet is also quite low at just £/$/€15, but the RTP is more or less average at 96.04%. The biggest news in the main game is the wild diamonds, which can appear in clusters of up to four for a 4x multiplier, and can substitute for other symbols to make wins. It’s pretty clear that this isn’t a game for high rollers, with a maximum win of 650x your stake possible if you manage to land a screen full of high value symbols as well as the big 4x multiplier diamonds, but it’s still great fun to spin if you’re a beginner because of the awesome visuals and simple gameplay.

If that jackpot isn’t enough for you then there’s a slightly larger one in the offing too, thanks to the wheel of fortune bonus game: Land three bonus symbols in a row to activate it, and you’ll be allowed to spin the wheel for a prize that’s potentially as high as 888x your stake instead.

We actually found ourselves getting attached to the theme of Diamond Empire, which like a diamond is strangely seductive. It’s not the most complicated or the best paying pokie you’ll ever see, but it does manage that all important marriage of a fun theme and some good prizes that makes for a really playable and simple slot to enjoy casually.