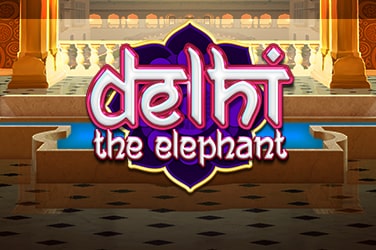 Considering the size of the country and its rich tapestry of cultures, you don’t actually see many Indian themed slots out there on the pokie markets, which is why we were excited to play Delhi the Elephant! This game is a fun, cute and exciting celebration of some of India’s most famous icons, including gorgeous architecture, delicious food and of course the elephants themselves. But will you manage to land yourself a jumbo sized jackpot, or is this a slot that an elephant had better learn to forget? Let’s take a look in our Delhi the Elephant slot game review.

You won’t be surprised to learn that the Delhi the Elephant slot game is jam packed with bright colours and loud noises, something that starts right from the off with the lavish background. Set inside a lavish hotel, implied by the little monkey dressed as a bellboy who joins you, there is a lovely orange room covered in paintings and ornate carvings around you. The symbols on the reels include the standard 9 – A in bright colours for the low value icons, while the high value symbols include India’s famous Tuk Tuks, piles of spices, a sacred candle and a purple lotus flower. Of course Delhi the Elephant and Mumbai the monkey make lots of appearances, and regularly trundle on screen to help you out.

The layout of Delhi the Elephant is pretty traditional, consisting of three rows and five reels with 20 pay lines to play on and a maximum bet of £/$/€100 per spin. The payouts from the symbols are fairly high, maxing out at 500x yoru stake for five of the golden peacock scatter or purple wild, while the highest paying normal symbols are the spices and Tuk Tuk, paying 400x for five. You also get the benefit of Delhi and Mumbai’s help in this game, and the pair will randomly change or add symbols on the reels by stamping across the screen and throwing bananas, while they’ll sometimes even grant you cool walking wilds that hop down a row with every spin. All this adds up to a low RTP of 95% exactly, but that can be a very changeable figure if you happen to land a big helping hand from one of our animal friends.

Alongside all this random fun is an additional free spins round, activated by landing three golden peacocks on the reels in one spin. You’ll then choose between five Delhi or Mumbai free spins, where the former grants you a walking wild to play with and the latter grants you transforming symbols that all become the same symbol for big wins. You may also get a super symbol, which comes with up to a 4x multiplier on top. Best of all, if any of the combos you make have a Delhi or Mumbai token on them, you’ll be rewarded with a re-triggered free spins round using the character whose tokens you collected the most of.

Delhi the Elephant is a vibrant, bright and exciting pokie that uses its Indian theme to the full, delivering fun and funny little moments that can really turn your game upside down. There’s a risk of coming out empty handed if luck doesn’t go your way, but there are so many bonuses that a good run will hopefully have you leaving with a wallet full of cash!