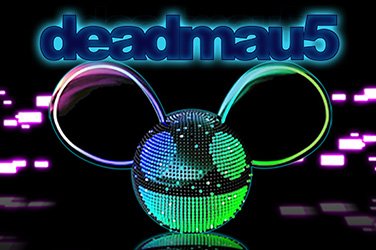 The deadmau5 slot is quite simple to set up. The action happens on a 5-reel, 3-row slot machine with 243 chances to win.

A winning combination is formed by striking matching symbols or wilds on neighbouring reels, commencing from the leftmost reel.

The deadmau5 slot game is set in a nightclub. The music isn’t for everyone, but the general design is good. You’ll hear parts of the deadmau5 discography blasting away while you spin, as you’d expect given the topic. 4Ware and Monophobia are two tracks on the album.

Stakes begin at 20p per spin and rise to a maximum of £100. To set your level, tap on the coins next to the spin key and drag the slider. You can set 10, 25, 50, or 100 auto-spins if necessary. Click the lightning bolt if you want to increase the bass and engage in turbo rotation mode.

You’ll find neon-style heart, diamond, club, and spade symbols on the reels and five dancing women. The greatest value symbol is the lady with the forehead jewels, which pays out 0.5, 2.5, or 10 times your total bet if you get 3, 4, or 5 in a row. The wild symbol is the deadmau5 logo, which can replace all other symbols except the scatter. Only reels 2, 3, and 4 can contain the wild symbol.

Rolling Reels Feature: Starting on reel 1, hit three or more matching symbols on adjacent reels to form a winning combination. The winning symbols are erased, and new symbols appear to take their place. After that, a new compensation consideration is made. The process repeats if a new winner emerges.

Free Spin Feature: The Free Spins feature is triggered when three, four, or five scatters appear on the same spin. You can win up to 25 free spins and a payment of 5, 25, or 250 times your entire wager.

The RTP of deadmau5 is 95.22 percent, which is on the low side. The hit frequency rate is 31.52 percent, which means you’ll hit a win almost one-third of the time. The volatility, on the other hand, is quite considerable. You can win up to 2,100 times your total stake on a single spin here.

Microgaming’s deadmau5 slot is a conventional stylish branded game. The visuals and audio are of good quality. Although the gameplay isn’t overly sophisticated, the mix of Rolling Reels, stacked wilds, free spins, and increasing multipliers is a winning mix.