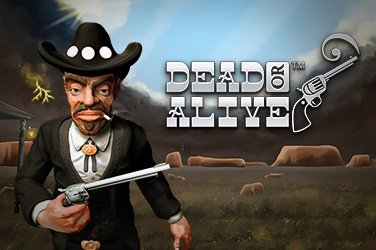 Dead or Alive is a slot game from NetEnt that will take players to the Wild West, where they can become a Cowboy and enjoy some of the best free spins bonuses around!

Dead or Alive is a slot game that has been a staple for NetEnt, as it has proven to be a title that continues to remain popular with gamers despite having been available for a vast number of years.

This particular title features a Wild West theme and immerses players into a setting where they will feel like a cowboy with each of the visuals to have been applied. There is the classic wooden design, whilst several icons and objects in the game only help to highlight the themes further.

The playing grid of this game consists of a 5×3 formation as players are required to match 3 or more identical symbols on the nine available paylines to trigger a win.

As mentioned, a number of the symbols provided in this game fit the Wild West theme to have been adopted. Therefore, it should not come as a surprise to learn that there are icons, including the sheriff’s gold star, a holster and gun, the cowboy hat, the cowboy boots, and the whisky.

These specific icons are also followed by the playing card icons that have been made available.

One of the Dead or Alive bonus features available in this game is the free spins round that can be triggered. All players need to do to activate this round is to land three or more of the scatter icons on a single spin.

The scatter icons (depicted as the crossed pistols) can provide payouts when two or more of them appear, but those who land three or more of them will also be blessed with 12 free spins! Furthermore, the free spins game will see the paylines multiple each win by double!

The fun does not stop there in this Dead or Alive bonus feature, as players will also find that the wilds will become sticky and remain in position for as long as the bonus is active! If the game is re-triggered by landing more scatters, those wilds will remain, too! If sticky wilds appear on all reels, then an additional five free spins will be provided!

NetEnt has provided players of this Dead or Alive slot game with the opportunity to theoretically win several times as the return to player (RTP) rate has been set at around 96.8%. This number is generous, and given the medium volatility level, there are several possible chances to win!

This Dead or Alive slot game from NetEnt proves to be an excellent title and one that many CasinoNZ players enjoy! It is incredibly simple to play and immerse yourself in, whilst the bonus features continue to make the gameplay as interesting as possible with each spin!

If you like the Dead or Alive slot game, why not try Deadwood or Tombstone!