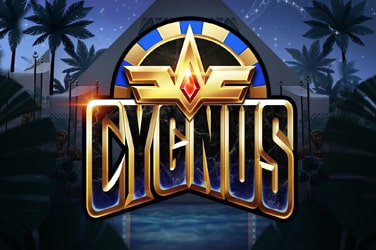 Cygnus is a unique slot by ELK Studios, a contemporary slot designer from Sweden. This slot offers a fresh take on the Ancient Egyptian theme; the slot’s title makes reference to one of the stars which makes up the Northern Cross in the sky, a constellation which is said to bear an inexplicable resemblance to the layout of the pyramids of Giza.

Cygnus adds a cosmic twist to the Ancient Egyptian theme, showing that even old genres can be reimagined if the right developer comes along.

Cygnus features the incredibly popular Avalanche feature, which means that all symbols which are part of a win explode and new symbols fall into place. This means that multiple wins can land from a single spin. More than this, as players land consecutive wins, each multiplier Scatter symbol which lands on the bottom row advances the multiplier meter, meaning later consecutive wins payout big. If a bonus symbol reaches the left pillar, this will trigger the Free Drops bonus game, which offers 7 Free Drops with multiplier Scatter symbols ‘sticking’ between drops, which means they’re much more likely to reach the bottom row. Free Drops are almost always where the slot’s biggest wins are found.

Cygnus offers a return to player of 96.10%, which means players who spend $100 on the reels can expect an average return of $96.10. This is about average, although players keen to maximise winnings could probably do better elsewhere. It’s a medium to high variance slot, which means it’s worth waiting for those big Free Drops payouts; casual players looking for a slot they can drop in and out of might be disappointed here.

It’s not often that a slot comes along that feels really unique, but Cygnus might just be one of these slots. Everything from the game’s theme to its design and gameplay feels different; ELK Studios are really trying to do something new here. If you’ve previously enjoyed ways to win slots with cascading reels, then you might find something new to love here. The RTP is decent, but nothing special, but we’ve got a feeling that average returns aren’t what will attract most players to Cygnus.