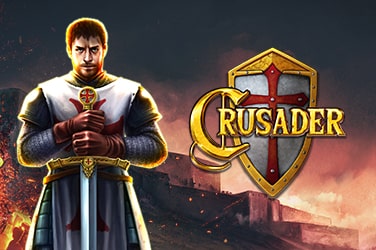 The Crusades still hold romantic place in the history of Europe as a time when brave knights in shining armour travelled far from their homes to do heroic deeds in foreign lands to protect their faith. But rather than cover the largely successful First Crusade, Crusader by Elk Studios is set at the tail end of the Crusader Kingdoms’ lives with the Siege of Acre in 1291. Spoiler alert: It didn’t end well for the Christians. But will your journey to the Holy Land end in failure, or will you return home laden with treasure and glory? Let’s find out in our Crusader slot game review.

This Crusader pokie certainly does a good job of capturing the unpleasantness of war, and there’s not much that’s romantic in sight in this pokie. The background to the slot is a grim looking fortress on a hill surrounded by a blasted plain where sparks, smoke and dust swirl dynamically as you play. The symbols on the reels include the face card symbols J – K as well as various bits of crusader iconography including swords, daggers, gold chests, the Holy Grail and the crests of various Crusader temples including the Knights Templar, the Knights of St John and the Knights Hospitaller. Suitably dramatic music plays in the background and there are sounds of clashing steel and battle as you spin, which add to the drama.

The most interesting thing about the Crusader slot game is immediately apparent, as you get a slightly boosted four rows and five reels to play on, which can be boosted further in the bonuses. This means you start with 26 pay lines on which you can bet up to £/$/€100 per spin. The downside of this is that the top prizes aren’t huge, maxing out at 10x your stake for five Holy Grails, though it’s balanced by a higher chance of winning. Confirming this assessment is the RTP, which is a shade above average at 96.1%.

The key symbol in this pokie is the Crusader, a grim looking knight in his traditional white robes, who can land fully stacked on the left and right hand reels. If he lands slightly off the screen he will be nudged onto the screen so that he takes up an entire reel, and you get a free re-spin for every nudge required to get him there. Once in place he will turn into a full reel of stacked wilds, and you’ll get another re-spin to see if you win. The Crusader can land in any spin, but if two Crusaders land on the screen at once then you get eight free spins. During these spins a newly created arrow symbol can appear, and every time it lands you’ll get an extra row added to the layout up to a maximum of 12, boosting your ways to win up to 98.

Crusader can be quite a brutal slot, much like fighting a losing battle in a parched desert, Yet, luckily there’s always the hope of those brave knights showing up and winning the day, because a successful bonus round can win you up to 2,500x your stake – a King’s ransom no matter how you look at it!