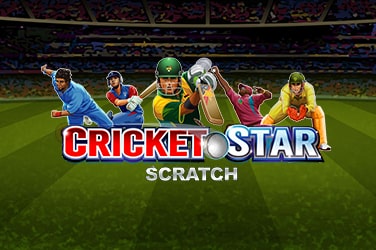 Cricket is one of the world’s most popular sports, so it makes sense for pokie developers to try and cash in on the level of interest by turning it into a slots experience. Sports games have a bit of a sketchy track record in the slots world, however, and for every genuinely fun and innovative sports title that gets released there are three boring, derivative slots with nothing but a team name slapped on it for a theme. So is Cricket Star Scratch one of the former or one of the latter? Let’s find out in our Cricket Star Scratch slot game review.

Cricket Star Scratch is a little like the game itself, in that it’s full of colour and spectacle right from the get go. The background of the reels is a big oval cricket stadium with bright green grass behind it and the pitch directly in front, with the wicket just visible behind. The symbols are all unique and include a variety of Cricket themed images including international teams in play, as well as close ups of players bowling and batting, running and catching, as well as one of a set of fans. One of the nicer touches in this game is that there are even recognizable Cricketers depicted, including Sri Lankan bowler Lasith Malinga and Australian batsman David Warner.

As the name implies Cricket Star Scratch is a scratch machine rather than a traditional slot, which is basically a slot game boiled down to its most core elements. There are nine symbols in all, three reels and three rows, and rather than spinning top to bottom these reels spin from right to left. It’s actually just like a real life scratch card, in the sense that you can land the symbols anywhere you like and still win, but the key to it is to land three of any matching symbol to win.

The pay table is even left helpfully to the left of the screen, and ranges from twice your stake for the group of fans all the way to a whopping 10,000x your stake! It’s supposed to be fast and furious, and while it may not be the most stimulating game you ever saw, there are few ways to spin as quickly and to win big money as easily as this. With a 94% RTP it should come as no shock that this is a high volatility slot game, with big wins coming few and far between. But it only needs to happen once, right?

Scratch pokies are about as simple as they come, so if you were after a slot that’s as complex as a video game with movie graphics, this isn’t the game for you. If you’d like to have fun while playing a simple game that looks good and could win you a seriously hefty prize, it’s hard to find a better game for cricket fans than Cricket Star Scratch!