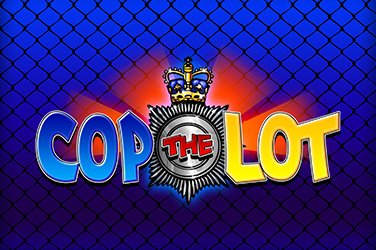 Cop The Lot Safe Grabber is quite a disorienting game at first because of its strange layout, and while many slot games started out life as actual fruit machines that you might find in arcades or pubs, it’s unusual for a game to recreate that format exactly on screen!

Just like a real fruity, the Cop The Lot Safe Grabber slot game looks like a bit of a confusing mess at first glance, but it all starts to come together when you understand what’s going on. Simply, the reels are at the bottom of the screen while the huge bonus area is at the top, which you’ll access by landing symbols with numbers on them that let you advance along the bonus track. The theme of this game is cops and robbers, and you’ll be helping a desperate duo of thieves grab as many safes as they can before they make a getaway. It’s all just a fairly thin story based around these incredible bonuses, but it looks fun and the cartoonish graphics raise a smile at least.

While the game may look a bit confusing it’s actually super easy to play, and you can’t really go wrong. The reels offer some modest prizes, but the real fun is to be had by activating the bonuses. You’ll progressively land symbols with numbers on them as you play, which correspond to stages on the bonus trail above the reels. Each of these will move your character on the box above the reels which is filled with prizes and free spins, while little green arrows show you where you’ll go next. Despite the mazy nature of this slot the RTP is encouragingly generous at a high 96.57%, so there is definitely money to be won in this slot! You can bet a maximum of £/€/$100 on each spin, so it’s up to you to bet wisely and make the most of the amazing bonus structure.

Once you get to the end of the bonus trail, you’ll play at least one of 16 random games listed on the left of the reels that will have you earning free spins, playing mini games, gaining powers and a whole host of other benefits. You can cash out for the prize pot at the top of the screen at any time, or you can keep playing the games and risking your whole win on the next spin. It’s intoxicating stuff, and it really gives you a sense of control over your own destiny as you hold out for that one big win.

Cop The Lot Safe Grabber looks intimidating, but luckily there are detailed explanations of the game and each bonus included in the game, so you’ll soon get the hang of it. Once the dust settles you’ll find a pleasingly old school fruit machine game that offers an absolute mountain of fun and exciting features, as well as some top prizes. Simply put, this is a must play title!