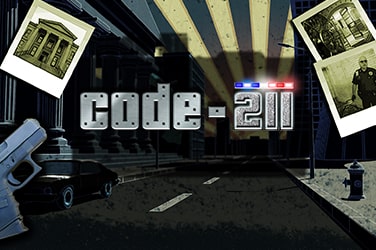 It’s a dangerous life when you’re a gangster, as the number of bullet holes that riddle this next pokie proves, but there are great rewards to be had too! If you’re looking for that kind of action we suggest playing slots rather than robbing a bank, but you can have a bit of both by playing Code-211 by Genii. The number refers to the crime number of robbery in the California penal code, also commonly used as shorthand on police radios, and that’s exactly what you’re going to be doing as you pull off the heist of the century. But will you come away with the cash, or are you going inside? Let’s take a look in our Code-211 slot game review.

The style of this slot bears more than a passing resemblance to the Grand Theft Auto series of games, also based around the lives of criminals in the US, from the art style to the fonts. The background in Code-211 is a heavily stylised street scene of the area outside the bank you’re robbing complete with a getaway car and photos of your target, while on the reels the low value symbols are the standard 10 – A and the high value symbols are scenes from your attempted robbery. There are also sound effects like screeching tyres, police sirens and little animations that activate when you land combos, while the soundtrack is a driving heavy metal theme.

The Code-211 slot game uses a standard layout of five reels and three rows, with 15 pay lines where you can bet a maximum of £/$/€30 per spin. The symbols pay pretty well in the main game, with the sub machine gun and the bomb paying 500x your stake for five in a row, while even the lowest paying card symbols pay 75x your stake for five. The best paying symbol, however, is the getaway car wild, which rewards you with a whopping 7500x your stake if you land five of them. The RTP is also encouraging, coming in at 96.25%, so there are definitely wins to be had in this pokie.

There are a couple of extra bonuses to help you along in this game, one of which is a free spins round and the other is a pick and win. The free spins can be activated by landing three or more of the security camera footage scatters, made even better by the fact that all wins in these free spins will be multiplied by three for some really big totals. There’s another bonus game activated by landing three of the armoured suitcases full of cash, which you’ll then be able to pick between to determine your prize. Remember, the more you bet the bigger the prize in this round, so don’t be stingy!

Code-211 is a fast paced and exciting slot that doesn’t hold back on the prizes, yet still offers some interesting bonuses to help you make even more money. The art style looks dated, but we loved the little touches such as the sound effects and animations.