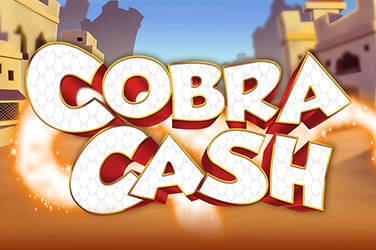 There’s something about an Arabian market scene that makes you think of excitement, mystery and adventure. You never know what is going to be around the corner or on the next stall, which is probably why pokie players love this setting too. Each spin is a new adventure and you never know what’s coming next, which is a feeling you get from Cobra Cash thanks to its range of unpredictable features and unexpected prizes. But will you pick up a hidden gem in this market, or are you going to get swindled? Let’s take a look in our Cobra Cash slot game review.

The Cobra Cash slot game takes place in one of those aforementioned dusty Arabian markets, with a street of boxy whitewashed houses behind and a colourful market stall as the background to the reels. The artwork here isn’t the most sophisticated, and even though it’s deliberately cartoonish we have seen better efforts recently, but it’s pleasant and colourful. The low value symbols are represented by the standard 9 to A decked out in jazzy patterns, while crossed swords, a cobra and a lantern make up the higher value symbols along with the game’s logo and a wild. So not the most imaginative, but the jangly Middle Eastern music in the background makes up for that a bit.

You get a lot of symbols to play with in Cobra Cash, because there are actually six reels and four rows in this layout, with 40 pay lines on which you can bet up to £/$/€100 per spin. This is very much a game that saves the big prizes for the bonus round, so don’t be too surprised by the low payouts in the main game, which top out at 25x your stake for five while most of the symbols don’t even pay 1x for less than five in a row. This contributes to a pretty low RTP of just 95.3%, but don’t be disheartened, because it all comes good in the bonuses!

There are a lot of bonuses in Cobra Cash, so listen up! Randomly in the main game you can get a bonus when a green snake slithers on screen, giving you the choice of seven baskets containing different coloured snakes. When you pick one of these snakes they’ll slither across the reels and turn symbols they touch wild, with some snakes creating more less valuable wilds and others creating fewer more valuable wilds.

The other big bonus is the free spins round, activated by landing three or more snake scatters. You can get up to 15 free spins to start with if you land six scatters, but you can keep adding to these by landing more than two scatters at any time during the free spins. Not only that, but during the spins you can activate a random modifier by landing three or more scatters including: up to six extra wilds, a random snake making more wilds, the random snakes are upgraded to more valuable ones, the random snakes are bigger and turn more symbols into wilds.

Cobra Cash is a fun little game that makes great use of its bonus rounds to inject a lot of variety and fun into the game. The visuals aren’t great and the main game doesn’t pay that well, but you’ll forget all about that when your game is getting turned upside down by a few well placed snakes!