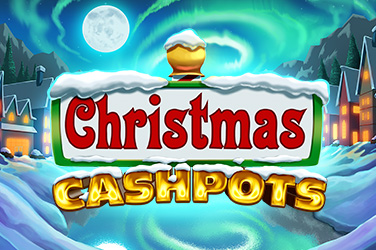 The cashpots name should tell you all you need to know about how this slot works, because it’s a common name for the cash collector mechanic that has become very popular in recent years. In this case, Christmas Cashpots has a very festive theme to go alongside the cash collecting fun, bringing you a winter wonderland that’s complete with Sana, his reindeer and his little army of elves who will try to make your wishes come true! But will Santa bring you a load of cash for Christmas, or just a lump of coal? Let’s find out in our Christmas Cashpots slot game review.

You should really know what to expect from a Christmas pokie by now, but if you’re wondering, this game features a classic North Pole background with a cutesy Nordic village in a moonlit clearing in the forest, over which the Northern Lights dance and play in the sky. The snow lies thick on the ground and on the buildings as well as one the reels, where wrapped presents represent the low value symbols, while chubby little 3D elves, reindeer and santas represent the high value symbols.The music in Christmas Cashpots is particularly bombastic and festive, while the animations are a bit more limited, but you do get symbols expanding and jiggling to celebrate wins while lights dance and pulse across the screen.

The Christmas Cashpots slot game isn’t the most adventurous in terms of its mechanics, making use of five reels and three rows, while there are ten pay lines on which you can bet your maximum of £/€/$60 per spin. The maximum payout in the main game is 200x your bet for the game’s logo scatter, but there are a lot of symbols that offer 100x your bet too, including the reindeer, elf and santa. All in all the highest potential jackpot is much bigger at 2500x your stake, though that’s only accessible through a good run in the bonus rounds. Still, the RTP sits nicely above the average at 96.5%, so it’s hard to complain about that!

As we’ve already mentioned, Christmas Cashpots has one major feature that all players will be hoping to hit: the cash collector game. That’s activated by landing six or more gift sacks on the reels as well as at least one Santa’s sleigh. Once you’ve achieved this you get five free spins with the sacks locked in place while the other reels spin round them. Your objective is to land as many extra sacks and sleighs as you can, and at the end the combined value of your sacks will be added together and paid out as many times as there are sleighs. As you can imagine, a screen full of sacks and a few sleighs alongside them can quickly add up to an intimidating total!

Experienced pokie players will know exactly what they’re getting into with a cash collector bonus, and for some it will be right at the top of their Christmas list, while others might prefer a more varied set of bonuses. Whatever you think though, it’s hard to argue with Christmas Cashpots’ great prizes, and it’s well worth a play for the main game alone!