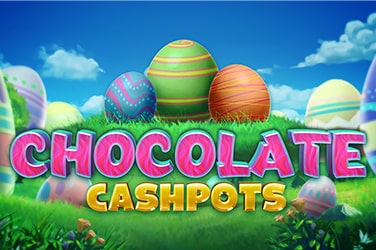 You might be familiar with a few other pokies out there with Cash Pots in the title, because it’s become a bit of a mini-genre in its own right, with various themed games built around the cash collector feature. This time it’s the turn of Chocolate Cash Pots, an Easter themed game that will appeal to anyone with a sweet tooth and anyone that likes winning lots of money. We can’t imagine there are many people who fall outside that particular Venn diagram, but will you get a sugar rush from this game or is it time for a trip to the dentist? Let’s find out in our Chocolate Cash Pots slot game review.

There’s nothing subtle about the Chocolate Cash Pots slot game, in which everything is slathered in chocolate as far as the eye can see. There’s a definite Easter theme emerging in the visuals on the reels, with lambs and chicks and little Easter bunnies bursting out of chocolate eggs to form the high value symbols, while chocolate stained 9 – A symbols make up the low value symbols. There is a generic easy listening soundtrack behind the game, and a few sound effects and animations to accompany the action.

As with other cash collector games the main game is a bit of a sideshow while you wait to activate the bonuses, but that doesn’t mean there aren’t some prizes to be won here in Chocolate Cash Pots. There are five reels and three rows to play on, with a maximum bet of £/$/€60 per spin possible on the 10 pay lines available. The top prize from the normal symbols is the lamb which pays 100x your stake for five, though you can claim 200x if you land five of the Cash Pots symbols in a row! Overall the RTP in this slot is high at 96.5%, which may come as a surprise, but you haven’t played the bonus yet!

This is the game mode we’ve all been waiting for in Chocolate Cash Pots: The cash collector. This is activated by landing at least six Easter egg symbols on reels one to four, and at least one golden bonus egg basket on reel five. At this point the fifth reel will re-spin each symbol individually five times in the hope of landing more of the golden baskets, and won’t stop until all the spins have been carried out or all the symbols are golden baskets. At this point it will pay out the value of all the Easter eggs that you landed to activate the game, as many times as you have golden baskets. Sounds complicated, but the simple fact is that you can win up to £/$/€12,000 in this game!

The visuals in Chocolate Cash Pots are very bright and you’ll find yourself having a lot of fun! The main game isn’t the most thrilling, but who cares when the bonus is so rewarding!