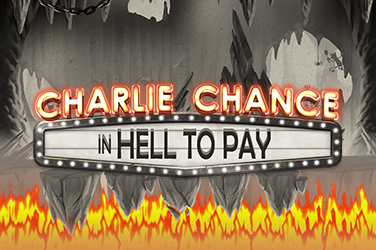 We love an unusual looking slot game, and we think there’s a good chance you won’t have played one like this before! Charlie Chance In Hell to Pay is a pokie that’s designed in the style of an old school cartoon of the sort that Disney and other studios were producing in the 1930s and 1940s, like the original Mickey Mouse shorts or Betty Boop. Poor Charlie seems to have got himself into a nasty scrape that’s sent him to the underworld, so can you help him get out and get rich at the same time? Let’s take a look in our Charlie Chance In Hell to Pay slot game review.

Charlie Chance In Hell to Pay has been designed from the ground up to fit this original theme, so everything adds to that unique visual style. The background to the reels is a highly detailed lake of fire, complete with tiny dancing demons and enormous jagged rocks, while in the foreground Charlie Chance stands nervously over precarious looking stepping stones. Charlie is joined by a lady demon dressed like a flapper, and both are depicted in that unmistakable style of early cartoons, while in the background a jolly ragtime theme plays. The reels themselves are actually in colour and comprise normal but highly detailed fruit symbols like grapes, pears and cherries, while there is also the lucky 666 and BAR to go with them. Cool animations and sound effects to depict Charlie’s adventure are also ever present, making this one of the most engaging pokies we’ve played in a while!

The Charlie Chance In Hell to Pay slot game actually only has three reels, three rows and five pay lines to play on where you can bet £/$/€100 per spin. While the biggest payout in the main game is actually the BAR, which pays just 4x your stake for three, this is one of those games that saves the big wins for the bonuses, so you shouldn’t worry too much! Evidence for this comes in the form of the RTP, which sits nicely above average at 96.23% despite the measly main game jackpot. There is also a menacing and brightly decorated wild to help you along, which can come in the form of a normal or multiplier wild worth up to 3x your win.

The scatter in Charlie Chance In Hell to Pay comes in the form of a little flame with the face of the female demon, which can appear on any of the game’s normal symbols. You can collect these in one round or across several, but once you have three of them you get eight free spins, during which Charlie will attempt to cross the lake of fire on stepping stones that have bonuses on them. At the start of each spin you’ll discover how many steps he’ll take, and the bonuses are randomized every time, so sometimes you’ll win a multiplier of up to 25x for the next spin, more spins, a guaranteed winning spin or a spin with extra wilds, and sometimes you’ll just get a cash prize. These bonuses aren’t massive, but they all add up, and if you get lucky with them you could end up bagging some big prizes on each set of free spins!

We recommend you play Charlie Chance In Hell to Pay , for the visuals and it has some great bonuses that pay really well on top!