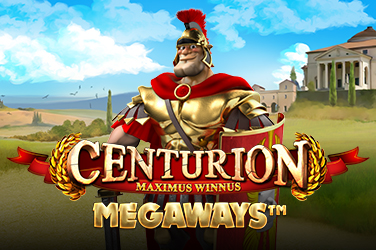 Centurion Megaways is a popular and recognisable slot game due to its loveable little mascot, brawny looking Roman soldier Maximus Winnus. On physical slot machines around the world and online casinos across the net, Maximus has been helping players win for the last few years, and now he’s here to help you out in his first megaways pokie. But will he be able to bring you the riches of Rome itself, or will your Empire crumble? Let’s find out in our Centurion Megaways slot game review.

Centurion Megaways is set in the same world as the other centurion pokies, so it looks the same as the rest, but if you’ve never played this type of slot game before imagine everything quintessentially Roman. The backdrop is a classic scene of the Tuscan countryside with a Roman temple in the foreground, while the symbols on the reels include chariots, amphitheatres, crossed swords, Roman coins and Roman helmets. The low value symbols are the standard 9 – A, but in a cool looking Roman font. Alongside all the visuals are the classic Centurion sound effects including the trumpet fanfare that follows along with your game, and some cool animations as cheeky Maximus messes about with the symbols on the reels.

As a megaways game you get to play with the famed megaways mechanic, which randomizes the number of rows in every turn by changing the size of the symbols. The layout changes and gives you up to 5×10 symbols in every turn, meaning that you can have between 342 and 117,649 ways to win, a truly staggering range that will affect your play greatly. The downside to this is a relatively miserly betting limit of £/$/€20, but it’s not hard to see how you can still win a fortune even then! There is also a cascading reels feature in play that removes winning combos and replaces them with new symbols, effectively giving you a re-spin every time and enabling you to set off streaks of wins. The RTP is a shade under average at 95.9% due to the volatility of a megaways slot, but when you win you can really win big!

Hold onto your helmets, because the Centurion Megaways slot game comes with a LOT of features. First off are the random ones that the cheeky scamp Maximums Winnus will pop out of the bushes and award you. These include: A random win of 20x your stake, a load of extra Centurion scatters, a random floor on the number of ways to win, a guaranteed spin on maximum ways to win, and up to 100 mystery symbols that transform into the same symbol for a big win.

As well as these there are a load of extra bonuses you can activate by landing three Centurion scatters, selected by spinning a wheel of fortune. Prizes on Parade and Super Prizes on Parade is another wheel of fortune type game where you try to land on the shield with the best prize on it. Caesar’s Free Spins and Super Caesar’s Free Spins give you up to 16 free spins with a multiplier of up to 5x. Wild and Super Wild Power Spins grant you up to three wild reels with a multiplier of up to 5x on each reel. Phew!

This pokie is all about volatility, and your mileage will vary depending on how lucky you get with those megaways. Centurion Megaways is easily generous enough to keep piling on the bonuses and wins to get you a fortune, but it can just as easily leave you floundering in the little leagues!