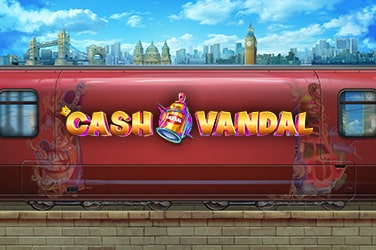 Like most people we don’t think vandalism is a great idea, but we also can’t help but admire the time, effort and skill that goes into making those massive works of art you see around the place, even if it does mean a lot more work for some poor guy with a mop. Cash Vandal seems to be very much on the side of the vandals in this glamorous, hip hop themed tour of Europe’s capitals in which you’ll be collecting spray paint renditions of some familiar symbols. But will you be then next Banksy or will you get banged up? Let’s take a look in our Cash Vandal slot game review.

We have to admit that the Cash Vandal slot game looks very stylish, and from the laid back hip hop soundtrack in the background to the clever subway concept behind the game, there’s a lot to like. Your reels are hosted on the side of a subway train that moves through tunnels from city to city in a gorgeous series of animations, emerging in front of buildings and landmarks you’ll recognise. The symbols themselves are excellent graffiti versions of typical fruity symbols like cherries, raspberries, diamonds and gold bars, as well as a cheeky spray can that’s your ticket to riches.

There are four reels to play on in Cash Vandal, to go with the usual three rows, and while this means fewer ways to win it also means you have to land fewer symbols to get the top prizes. There are just 10 pay lines on which you can bet up to £/$/€100 per spin, and there aren’t really any other features to speak of in the main game of this pokie, though we loved the way that the game moves on between cities after just a couple of spins so that you’re always on the move. It’s more than just a cosmetic change too, as you’ll see in the bonuses! The most valuable symbol is the wild, which is just Wild written in stylised graffiti letters, which pays 50x your stake for five, adding up to an RTP of 96.47%

The bonuses are mercifully easy to trigger in Cash Vandal and start by landing just one gold spray can on reel four. If this happens you’ll get a re-spin, which is a chance to land a better combo, as well as a chance to land another can. If you manage this you’ll activate the special feature of whichever city you’re in at the time. In London the spray can will transform between one and nine of the symbols into matching symbols for bigger wins, in Paris the spray can combines reels one and two into one mega symbol, while in Berlin the spray can adds up to three wilds to the reels. Manage to land up to four spray cans on one of those re-spins and you’ll get 10 free spins during which you’ll get to choose which one of the three cities you play in, while you’ll also get a full stack of wilds on reel four throughout.

Cash Vandal is one good looking pokie, because not only is the visual style and art amazing, the concept and animations are great looking too. It also pays well too, and with potential wins in the bonus round coming out at 5000x your stake, you could get very rich from this spot of property damage. Who says crime doesn’t pay?