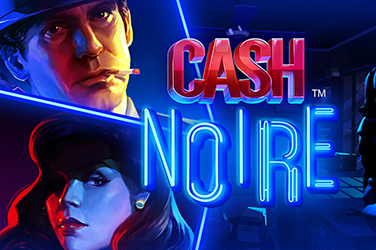 It’s time to step into a seedy underworld of crime and vice in our next pokie, which sees a stereotypical 50s gumshoe detective on the case of a dastardly criminal. Fans of vintage crime thrillers and film noire thrillers will love Cash Noire, which has everything from the red haired femme fatale to the hard bitten detective and the villain always one step ahead. But be careful, there’s plenty of danger out there for those who can follow the clues and get to the bottom of the case! So is this a classic crime caper or is it more Keystone Cops? Let’s take a look in our Cash Noire slot game review.

We have to admit, we adore the visuals in Cash Noire, which pulls no punches in a loving pastiche of the film noir genre. It’s got everything from rain soaked streets, dark alleys behind movie theatres and all the cast of characters you’d expect: The damsel in distress with a shady past, the sleep deprived detective in search of one big score, the master criminal who won’t be caught. The symbols are all unique and bring yet more classic noire touches: Stiletto daggers, snub nosed Derringers, shots of whiskey, playing cards and our three characters. There’s a detective in the classic trench coat and fedora outfit, the shady villain wielding a dagger and the flame haired femme fatale in a fascinator and cocktail dress. There are even some great animations and sound effects, including screeching tyres and gunshots, while the mysterious woman smokes in the shadowy background of your office.

There are loads of fun features in Cash Noire, starting with the 1024 ways-to-win layout of four rows and five reels, on which you can bet an impressive £/$/€200 per spin. On top of that this game also employs a cascading reels mechanic, so every win removes the winning symbols and causes more to fall into their place and potentially generate a chain of wins. There is a price for this generosity however, because even the highest value symbol on the reels pays just 0.80x your bet for five, so you’ll be relying on these features to get paid. The RTP is still slightly above average at 96.06% however, so don’t worry too much!

There’s a fun and interesting mechanic at play in the Cash Noire slot game, a ‘crime scene’ area that’s marked out by glowing red lines around a collection of symbols on screen. Landing winning combinations in that zone not only expands the zone, making it easier to win, but it also puts you one space further up the 13 space clue table, which is how you activate the bonus round. Another fun feature is the mystery symbol, and when one of these lands in the crime scene it takes over every space in the crime scene and transforms each square into one randomly chosen symbol. This guarantees a decent payout and moves you along the clue table.

Cash Noire is a pokie that is the perfect balance between style and substance, with all the cool charm of a classic noir crime thriller brought to life by excellent graphics, and some really cool gameplay and features to make it fun. The main game doesn’t pay well at all, but hit the bonuses and you’ll catch the crook!