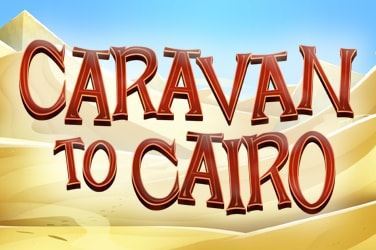 Is there any image that conjures up romantic visions of wealth and luxury more than the Silk Road? Caravans laden with spices, precious jewels, silks and rare items of every kind crossing mountains, deserts and the deep ocean in search of unimaginable riches. Well, almost. Because in Caravan to Cairo you can forget the romantic part! This wacky troupe of desert animals might be a little lacking in the style department, but they’ve definitely brought the fun with them. So will you get rich on a trip through the desert or will you get lost in the sand? Let’s take a look in our Caravan to Cairo slot game review.

We love the fun style of Caravan to Cairo that puts you in mind of a Saturday morning cartoon, and it’s obvious that a lot of thought has gone into the cast of characters. All of the symbols are unique and include animals in a variety of costumes, from a cat belly dancer to a crocodile pharaoh, a goat sultan, a camel princess and a snake magician. The background is a classic Egyptian scene of the Pyramids and the Sphinx, and everything is extremely detailed and well drawn. There’s no soundtrack, but there are some cute animations and sound effects.

The main attraction of this pokie in gameplay terms is its 243 ways to win, which means you’ve got a much higher chance of landing wins than usual, and you can bet £/$/€50 on each spin. Other than that it’s fairly typical with five reels and three rows to play on, while the wins aren’t exactly massive, topping out at 40x your bet for the crocodile symbol. There is also a wild in the form of a pyramid in Caravan to Cairo, but it doesn’t have any special powers other than the ability to substitute for other symbols, and the overall RTP is a little low at 95.25%

So why play this pokie at all? Well the Caravan to Cairo slot game does have a couple of tricks up its sleeve in the form of the bonus round. Landing between three and five elephant symbols will start the free spins bonus, during which you’re able to choose from different options that give you either a smaller set of spins and a bigger multiplier, or a smaller multiplier with more spins. This ability lets you choose between 20 spins with a 2x multiplier at one end, or five spins with a 10x multiplier at the other, and can really turn your game upside down if you pick right. Wins of up to 4000x your stake per spin can be achieved, which is way more than the maximum in the main game, but remember that there’s no guarantee!

Caravan to Cairo is a cute and fun looking game that isn’t much to write home about until you get to the bonus round, at which point you stand to make some serious cash. There’s no right answer regarding which option you choose, but play it safe or go for broke and you could get rich in just one spin!