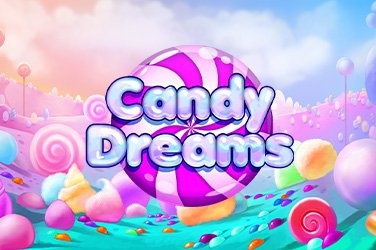 Microgaming are one of the biggest and best slot game developers out there, and Candy Dreams is another game by this studio that proves to be excellent in every way.

The candy theme should keep you hooked, while the game promises to deliver enough bonuses and prizes to sweeten the time you spend here as well.

The game is quite bright and colourful, in keeping with the theme. The background is pink and purple, with rainbow sprinkles and candy floss spread out across the screen to further entice you. The reels are a set of purple containers, with the middle reel having five icons, the two next to it with four, and the two outside reels having three symbols. The soundtrack is quite entertaining as well, with sound effects that celebrate all your wins, and this adds to the entertaining nature of the game.

The game has five reels and three rows, with 720 paylines. As stated earlier, the number of symbols on each reel is different, with the middle reel being the one with the most icons.

Landing three or more matching symbols on adjacent reels will trigger winning combinations. Given the number of paylines, the direction in which these combinations are created does not matter, which greatly increases the winning potential on this game.

The symbols are all quite colourful as well, in line with the game’s theme, and are all candies of different shapes and sizes. The Candy Dreams logo is the game’s Wild, while a Wild symbol and a gift also show up on the reels as additional Wilds. A multi coloured lollipop is the Scatter, and can help trigger the free spins round. As usual, the Wilds can substitute for all symbols on the reels except the Scatters. The pink orb is the bonus symbol, and will trigger a bonus round if three of them show up on the reels.

There are quite a few bonuses available in this game that help make it even sweeter for players. Landing three or more of the multi-colored lollipop scatter will trigger the free spins round. Here, you will get 12 free spins, where the present symbol will show up on the middle reel for every spin, and land three Wilds on the reels randomly. Thus, the free spins round can pay out some handsome prizes.

The Candy Planet bonus round is triggered if you land three or more of the pink orb symbols in the bonus game. Here, you will be greeted by 20 planets, where you have to pick them one by one to reveal cash prizes. The game ends when you reveal a popping candy, although if you have uncovered a pop blocker before this, you will be able to continue with this round.

This is a relatively high variance game, with a return to player (RTP) of 96.82%.

Candy Dreams is a very good themed slot game from Microgaming, which takes advantage of its theme to provide some excellent bonuses and rewards for players. The number of paylines means that generating winning combinations is a lot easier than on other games, and this is true for the bonus rounds and features as well. You will have a truly sweet time when playing this game.