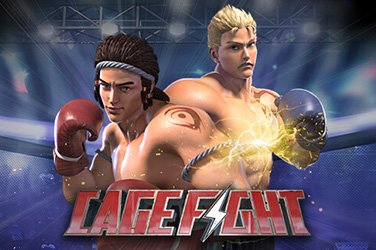 Boxing is one of the most popular sports in the world, so it is perhaps no surprise that there is a video slot game based on this as well.

Cage Fight, by SimplePlay, will bring the thrill of a bout right to your screens, and who knows, you could even walk away from this fight with a bag full of rewards!!

The game takes place in a ‘cage’, or a ring that is covered on all sides by a steel mesh, that is usually seen in mixed-martial arts (MMA) bouts. There is a cheering crowd in the background as well, while your fighter, a strong kickboxer, waits at the side of the ring to enter and begin the fight. In keeping with the theme, all the high-value symbols on the reels are related to this sport, while the soundtrack is also suitably high-tempo,, designed to get you motivated and fired up for this game.

There are five reels and three rows in this game, which has 30 paylines.

Wins are generated when you land three or more matching symbols on the same reels. There are large red buttons on either side of the reels which control gameplay. A ‘Play’ button triggers the reels when you click it, while there are smaller buttons below it through which you can set the number of spins you want the reels to autoplay for, if you want to do that. The betting controls are on the left of the reels, where you can choose the number of active paylines and your bet per line before every spin.

The various icons on the reels are all linked to kickboxing, so we see a punching bag, a pair of boxing gloves, a pair of bandages and a beautiful lady who is probably one of the cheerleaders. These are the high-value symbols, while the standard icons are the card royals which are quite colourful, but otherwise are not too notable. The championship belt is the game’s Wild, which shows up on all the reels except the first reel, and substitutes for all other symbols to help create winning combinations, while the bell symbol is the Scatter. The Scatter helps to trigger the free spins round.

Landing three or more of the Scatter icons will trigger the Free Spins round, where a red and blue glove will show up on the reels. Once the round ends, you will also have the option of triggering the power spins feature that delivers extra wilds, multipliers or even cash wins.

This slot game from SimplePlay has a return to player (RTP) of 96.07%, and it is a high variance game.

This is a simple yet exciting game from SimplePlay, which can provide a lot of excitement through the base game as well as the bonus spins round. The icons and gameplay are quite well-suited to the theme, and players should have a good time with this game as well as through the prospects of some big prizes as well.