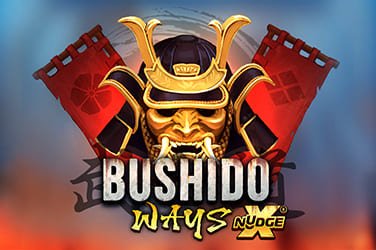 The Bushido are a set of Japanese warriors that Nolimit City have taken inspiration from here, this is an exciting slot with multiple bonus features including potentially unlimited free spins.

The RTP (Return to player) is 96.01% that is nicely at the top end of industry standard., with potential of a 30,000x return it is clear how this is made.

Behind the reels is what looks like a battle scene with a sunset making the silhouettes of flags and banners visible stand out. The same banners can be seen either side of the grid that can hold information such as free spins when they are won in front of a dark blue, dusk sky. The 5-reel 4-row play grid is bordered by a wooden structure, the number of rows vary by the symbols that appear on each spin.

The symbols that appear on the reels include low value 10 – A Royals that appear on wooden boards with the inscription appearing in writing typical of samurai movies and games. The higher value symbols involve samurais that can land stacked taking up entire reels, they are very well designed with much detail bringing the game to life. The Wild symbol here is the nudging Geisha that lands on the 3rd reel only, there is another single Wild and a bonus samurai symbol to watch out for.

There is a wide range of bonus features in Bushido ways that players can hopefully trigger, to start the Geisha Wild stack 4 rows, it also nudges the reels turning them Wild with a multiplier increasing by 1x for every nudge. That is not the only Wild feature, if you can land the single Wild on reels 3, 4 or 5 they count as 3 symbols on reel 3, 3 symbols on reel 4 and 4 Wild on reel 5. This can provide up to 12,288 ways to get a winning combination in the main game, if it lands in the free spins game they are copied to the bottom of the reel before the slice.

Shogun Spins can be unlocked by landing 3 or more bonus symbols on the same spin, this will reward 8 Shogun or free spins with each additional bonus symbol adding another spin. Throughout this feature at least 1 Wil is certain to land on 2, 3, 4 or 5 with every spin, landing a stacked Geisha Wild automatically start the Geisha Spins feature.

The Geisha Spins feature can be triggered via the Shogun Spins bonus or by landing a stacked Geisha with 3 bonus symbols in a single spin, this also offers 8 free spins. This time every nudge the Geisha Wild performs will also provide a sticky multiplier to the game, an extra Geisha Spin is added by a bonus symbol landing during this.

There is certainly a lot tot talk about with bushido Ways, the multiple bonus features can be very valuable for players and what best they can be triggered simultaneously. The visual features are simple yet effective and the possible paylines are truly something to get excited about.

Head over to our slots page for more great game releases such as Wild Scarabs or Diamond Mine.