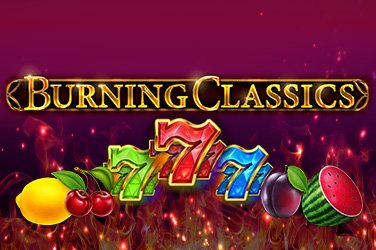 Burning Classics is exactly as the name suggests – a classic slot game, by game developers Booming Games, that has the potential to provide some truly explosive rewards for you if your luck is in!

This game has a traditional slot theme, with the addition of fire as an element. Thus, the background is a deep red, which is a classic for slot games, while the reels also resemble the original fruit-based slot games that were so popular and successful. The resemblance does not stop here – the symbols on the reels are also classic slot game icons. It is quite impressive that the makers of this game have managed to create this nostalgic feel while maintaining high-quality graphics, which gives this game a modern feel. The Wild and Scatter symbols appear in blazing letters on the reels, which is another nod to the fire theme, while there are also sparks that light up the reels when you land a win. Finally, the soundtrack is quite upbeat, with slot game sound effects adding to the overall ambience.

As mentioned earlier, the symbols on this game are all classic slot game icons. You have the traditional fruits, such as cherries, watermelons, plums and melons, as well as blue, green and red 7 symbols, which is another staple of traditional slot games. The fruits are the ‘Minor’ symbols, while the 7s are ‘Major’ symbols, and you are higher-paying, along with the Wild and Bonus symbols. As is usually seen in most games, the Wild substitutes for other symbols except the Scatter to help create winning combinations.

In keeping with the theme of this game, there are some very standard bonuses that can provide big wins for players. Landing the Free Spins Scatter symbol three or more times on a single spin will trigger the Free Spins round, with players receiving 10 free spins. Additionally, landing three, four or five of these symbols also gives you a prize – 10x, 50x or 200x of your stake, respectively. The round can also be retriggered if you land three or more of the Scatters again during the free spins round.

All symbols, other than the Scatter, can land stacked, which means that winning combinations can pay out several times, as multiple lines could see matching symbols being formed.

Players also have the option of a Gamble when you receive a win. If you choose to gamble, you will see a spinning number 7, and you have to choose the colour you think the number will land on. If your guess is correct, your winning amount is doubled, and you can continue to gamble in this manner up to a maximum of 10 times, or until you reach a payout of 10,000,000, whichever occurs first. Bear in mind that an incorrect guess at any point will result in all the earnings being lost, and that this option is only available in the base game.

This slot game has a return to player (RTP) of 96.1%, which is quite good, considering that this is only a medium volatility game.

Burning Classics is a great example of taking a classic theme and tweaking it a little, and Booming Games have managed to create a very interesting and attractive game through this approach.