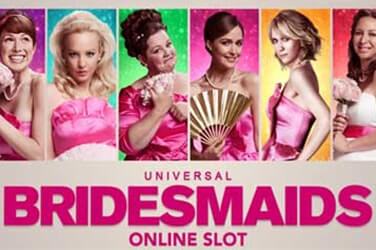 Bridesmaids is a fun and feminine slot based on the 2011 comedy film of the same name, directed by Paul Feig.

The slot was developed by Microgaming, one of the biggest developers working in the industry today and the developers of other licensed slots including Jurassic World and Game of Thrones 243 Ways.

The slot is clearly going to be heavily influenced by the design of the movie, so it sports a similar pink colour palette to the movie’s branding, with the slot’s biggest symbols being the cast of characters from the film, including bride Lillian, played by comedy legend Maya Rudolph, and chubby Megan, played by goofball comedy star Melissa McCarthy. It’s a simple design, but it’s all about bringing up the Bridesmaids imagery, which this slot does well.

Bridesmaids is a payline slot featuring 40 paylines. The game’s primary symbols of the bride and her bridesmaids all appear stacked on the reels, while lower valued card suit symbols appear in singles. Lilian is the slot’s highest paying symbol, paying out up to 500x the bet for five symbols on a payline, while Annie, Megan, and the rest of the girls pay up to 300x or 200x the bet for five symbols. The slot’s Wild is the Bridesmaids symbol, and this can appear stacked in both the base game and in Free Spins.

All of the slot’s bonus features are triggered by landing three, four, or five of the pink cupcake Scatter symbols. This will unlock some bonus cash prizes depending on how many Scatters land, as well as a spin of the Bonus Wheel. The Bonus Wheel is the gateway to the slot’s four primary features. These four features include two Free Spins modes and two Pick and Click games. Free Spins modes include Friendship Free Spins, in which wins pay both left to right and right to left and bridesmaids appear stacked on the reels, and Flying High Free Spins in which the popular Rolling Reels feature is active. Boutique Bonus and Magic Moments Bonus are pick and click games which offer bonus multipliers and cash prizes.

Bridesmaids has been adapted for play on mobile, so whether you like to play on tablet, laptop, or smartphone, this slot is a fine choice.

The return to player of Bridesmaids is 96.71%, which is pretty good and a little bit above average compared to most online slots. It’s also a medium variance slot, so it’s well balanced for most play styles and players shouldn’t be kept waiting too long to see the wins coming in.

Bridesmaids is a good example of a licensed slot done well. It’s fun to play, and the slot’s features have been designed to pick out memorable plot points and characters and bring them to the forefront of gameplay. Microgaming perhaps aren’t on a par with Blueprint when it comes to designing great licensed slots, but they’re getting there.