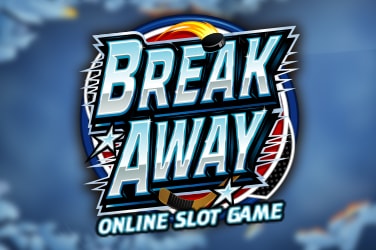 There are plenty of thrilling sports out there in the world but in North America, there are a select few that stand out above the rest – and one of those is ice hockey.

There’s a certain buzz associated with getting out there on the ice, and with that in mind, we’d like to welcome you to our Break Away slot game review.

We open up with a fairly standard 5×3 reel layout but from there, it’s anyone’s puck game as there are 243 ways to win here. We also have a whole host of themed symbols including ice resurfacer, skates, a helmet, a rink, a face-off, the referee, a goaltender and a player from both teams.

The return to player (RTP) percentage may not be important in your own mind but for many pokie players across the globe it can play a hugely influential role – and that’ll be true for some who decide to play Break Away. The reported RTP here tends to vary between 96.29% and 96.42%, both of which would be below the usual average, although the volatility is rated as medium which could open up some doors.

Sure, the gameplay is a bit rigid and it might feel slightly old school, but the soundtrack makes us feel like we’re right there on the rink and with some entertaining symbols to go alongside it, there’s not a lot they’ve done wrong.

The Break Away symbol is the wild in this one with the fire puck serving as the scatter.

Smashing Wild – this feature pops up randomly throughout the game and will first be hinted at when the Break Away logo freezes at the top. A player then skates around the screen and knocks into a reel, turning it wild in the process.

Rolling Reels – when a combination is created the symbols will freeze and shatter, giving new symbols the chance to fall into place – increasing the likelihood of big wins.

Break Away Stacked Wilds – The Break Away wild symbols can be stacked on the 3rd, 4th and 5th reels, giving out different amounts of those symbols on each reel. The third hands out 18 stacked wilds, the fourth gives you 25 and the fourth provides three stacked symbols.

Free Spins w/ Rolling Reels – if you land three, four or five of the fire puck scatters then you will receive 15, 20 or 25 free spins – with the rolling reels feature remaining active throughout. Plus, for every consecutive win, the multiplier increases by one up to a potential 6x.

Our Break Away slot game review has come to an end and boy oh boy do the bonus features make this slot what it is. Instead of being a paint by numbers sport-based slot, Break Away truly does break away from the pack by giving us some really fun gameplay and a great representation of ice hockey.