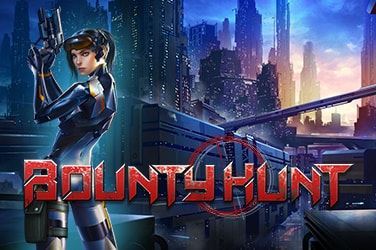 ReelPlay created a very exciting slot game called Bounty Hunt which we are going to be reviewing today. The game was released in 2016 and has proven to be a popular in the online casino industry.

Bounty Hunt has some great visuals that players will appreciate when loading up the game. The game is easy to play and has some nice background music to compliment the gameplay. Players will be pleased to know that you can go mobile with Bounty Hunt as the game is fully compatible with a range of different devices including desktops and phones.

Kat Lee is the law enforcer who this game is centred around, players follow her adventure as she tries to bring the criminals to justice. The set up of the game is very standard as there is five reels on display, however there are a lovely range of playlines on show- 25 in total.

The game Bounty Hunt is a mix of standard and creative icons, with the most common card symbols paying less which are the standard playing card iconcs. The higher valued ones have grenades, guns, three criminals on the run as well as Big Boss Hank Blade and Dr Fury which are Kat Lee herself-the highest paying base game icon! You can’t possibly miss the wild symbol as it has WILD slapped across it.

The Bounty Hunt slot game may not be as lucrative for players with an RTP of 95.54%, but what it lacks in payout options, it makes up for it in a large number of features which provide the excitement.

The Bounty Hunt game is a mix of fun and exciting features. The first one being the Crosshair Wilds feature where, on every spin in the base game, you will see crosshairs appear that randomly pick an icon from all those available to trigger something unique depending on which one it chooses!

With the touch of your screen, you can build up nice wins with this bounty hunter’s feature. Every icon on all other reels is turned wild by the Bounty Hunter as long as it matches one that was picked earlier in this round. The Grenade will see every icon become a Wild after being selected while the Criminal turns only its matching icons into Wilds for an even more rewarding experience!

At the crosshairs prompt, with consistently trying to stay on a wanted criminal’s trail, 10 free spins will be granted. Each time one is locked up and becomes a wild card for all future spins!

Bounty Hunt is an interesting game with a plethora of different characters that make the experience more fun and enjoyable. The bonus rounds make this game great and that is why we recommend it to our readers.