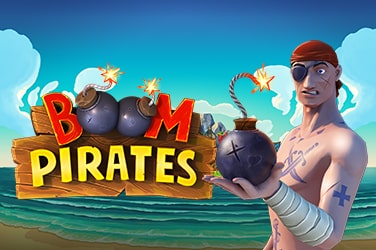 It’s important to innovate and really stay on your toes in the slot industry and that much is just kind of obvious – which is why Foxium have attempted to really go out on a limb with a fascinating new slot.

That leaves us where we are today as we prepare to offer you our Boom Pirates slot game review.

This slot operates under the realm of the Wonderways style which pretty much means all bets are off on a slot that features an insane 9×6 reel layout. The slot begins with 1,024 ways to win but that can extend, shockingly, to an absolutely insane 10,077,696 ways to win as the cannonball feature is triggered and fires at the reels to activate more ways to win – with certain sections of the 9×6 reel initially being blocked off.

We then have a range of themed symbols including Mary, Ben, a parrot and more.

The return to player (RTP) percentage is always going to be important in this business and that’ll be true for some who decide to play Boom Pirates. The reported RTP for this one comes in at around 96.19% which is slightly below the usual average, but with high volatility, all bets are off.

You can put down as little as $€£0.20 in this pokie or as high as $€£50 between the minimum and maximum stake, and from there, it’s all about trying to win 3,800x your initial stake and really rake in the big bucks.

The slot design seems a bit all over the place to start off with but when you really start to grasp what’s happening and how chaotic it is, the whole thing is a lot of fun.

This slot doesn’t have a conventional wild but it does feature Mary’s Swashbuckling Attack, which sees Mary swing across the reels and transform five symbols into five of a kind.

The ‘Ho’ scatters are important as if you land three or more of them, you’ll trigger the free spins bonus. You can also purchase entry into this round by putting down a bet of 66x your stake.

The cannonball feature is far more active and regular during the free spins and that means you’ll be able to expand the reels significantly. Once the reels have been expanded they’ll remain that way for the rest of the bonus game, meaning you’ll likely benefit from more generous winnings.

Our Boom Pirates slot game review has come to an end and while this may be one of the craziest slots we’ve ever reviewed, we quite like that. It understands that the pirate culture is a little bit wild and instead of hiding away from it, they embrace it and use that energy to further the gameplay.

They find the right balance with the bonuses and offer some decent winnings, which ensures that Boom Pirates comes highly recommended by us.