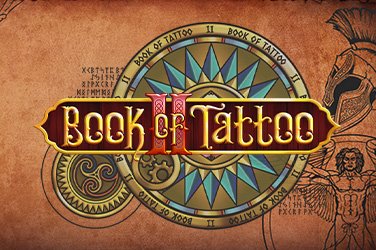 Fugaso have developed a tattoo-inspired title with their Book of Tattoo 2 slot game, which provides a number of great features, such as incredible Book of Tattoo 2 bonuses and a total of 243 ways to win, as well as 3 different progressive jackpots!

This Book of Tattoo 2 online slot game from Fugaso features some highly impressive visuals that helps to follow the tattoo theme provided. There are a number of expertly drawn creatures and humans located on the background of this game, with two of each adorned on the sides of the playing grid that features a golden trim.

There are a total of 5 reels and 3 rows available on this playing grid, as well as the potential to win from 243 different winning ways.

As with the visuals, there are a number of well-designed symbols available on the paytable of this Book of Tattoo 2 slot game.

The traditional for playing card suits, which consists of clubs, hearts, diamonds and spades, all appear in the form of different coloured crystals and provide the lowest rewards.

These are then followed by a quill pen, a toothed shark, a red dragon, an owl and a tiger. The most valuable character in this game is the skull with a hat.

We found that there are a number of great bonus features available after doing this Book of Tattoo 2 online slot game review.

The first is the mystery symbol. This can act as a wild as well as produce a couple of additional features. Whilst the mystery symbol can reveal itself to be any of the other icons on the grid, or help substitute to form other wins, it can provide mystery respins and mystery spins.

The bonus game is activated when this symbol lands on reels 1, 2 and 3 in a single spin, and will see them locked in place as a free respin will be started. If another mystery symbol appears during the free spin, it will also be locked and the process will then be repeated. The mystery spin feature can be triggered randomly at any time, with the number of spinning mystery symbols being increased on each turn.

Players who land 3 of the scatters, which is represented by a book, on the reels at the same time will land 10 free spins. Each mystery symbol that appears during this bonus game will remain locked, whilst any full mystery reel will add an additional 2 free spins.

The return to player (RTP) rate for this Book of Tattoo 2 slot game from Fugaso is 96.5%, whereas the volatility level for this game is of a high level.

Everyone loves the opportunity to win from 3 different progressive jackpots and with each of them triggered randomly, there are plenty of opportunities for you to pick one up after reading this Book of Tattoo 2 slot game review!

In addition, the plethora of Book of Tattoo 2 slot game bonuses available help to further provide even more excitement, thus making this a game that should be played in an instant!