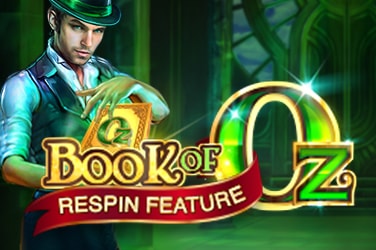 Book of Oz is a slot game by slots giant Microgaming, who have teamed up with Triple Edge Studios, themed around the magic city of Oz first seen in the Wizard of Oz book series by Frank L. Baum.

While the game doesn’t really have much to do with the book series, it takes the aesthetics of the Emerald City and transposes them delightfully to the slots, where players spin reels set amongst gorgeous green pillars to win prizes. Let’s take a look at how the game plays.

During the base game, Book of Oz is essentially a classic five-reel slot with 10 paylines in play. To win, players must line up combinations of matching symbols across single paylines. Symbols in the game include the Wizard of Oz, various vials, potions and concoctions, and of course the titular Book of Oz. The highest paying symbol in the game is the Wizard, who pays out between 1x and 500x the bet for between two and five symbols on a payline. Next, the blue Courage vial pays between 0.5x and 200x the bet for two to five symbols, while lower-paid A to 10 symbols pay up to 10x to 15x the bet for five symbols.

Book of Oz is packed with features to keep players interesting and make the game stand out from the crowd of other fantasy slots out there on the market. There’s a Free Spins mode which can be triggered by landing three or more Book symbols, which will unlock between 10 and 25 free spins. At the start of Free Spins, a special Expanding Wild symbol will also be awarded, which slowly expands to fill a reel when wins can be completed. On top of this, Book of Oz also gives players the chance to enjoy as many reel respins as they want. For a small extra cost, players can fix all but one reel in place and spin just one reel, as many times as they like. This gives the slot an extra element of strategy and gives more control of the reels back to the player.

Book of Oz offers an RTP of 96.31%, which is decent and certainly not to be dismissed. This means that for every $100 players spend on the game, they can expect to win back around $96.31 on average, although obviously, most players will hope to be the lucky ones who win back more than this. It’s a high variance slot, though, which means wins are usually big but few and far between.

Book of Oz is a beautifully illustrated fantasy slot which whisks players away to a magical land filled with potions and wizards. It offers a decent RTP, a fun Free Spins round, and a respin option which will no doubt be welcomed by players who enjoy an extra wager or two. Microgaming are onto a winner with this one.