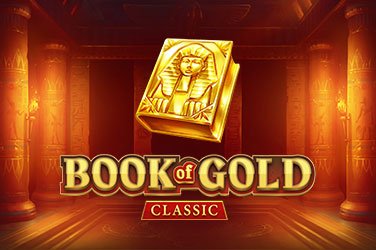 Brought to you by Playson, the Book of Gold Classic Slot Game is a five-reel by three-row slot with ten paylines and the chance to unlock winnings worth up to 5,000 times your stake value. The game takes players on an immersive adventure to the ancient tombs of the pharaohs. It’s compatible across all devices – desktop PCs, laptops, tablets and mobiles – thanks to the fully responsive design.

With a Return to Player (RTP) of 95.94%, the Book of Gold Classic Slot Game is considered a medium volatility slot.

The Book of Gold Classic Slot Game is set in Ancient Egypt and transports players on an exciting journey to the homeland of ancient tombs and pyramids. The reels sit in front of a sandy backdrop where we can see the majestic pyramids and magnificent sunset. Though there’s nothing too exciting going on in the background, the graphics are high-quality. The design exudes warmth and the classy soundtrack adds to the gameplay experience.

In terms of symbols, there are nine in the standard set, with the lowest value symbols consisting of the usual playing card royals – 10, J, Q, K and A. There’s also an ankh, Horus Rye, Ra and Pharaoh acting as the higher paying symbols. You only need to match two high-paying symbols on a line to result in a win, though you’ll need three lower-paying symbols to be rewarded with a prize.

The Book of Gold symbol itself acts as the wild and scatter within the game, substituting for all standard symbols to create winning combinations and activate the free spins bonus round if you land three, four or five simultaneously.

The Book of Gold Classic Slot Game’s minimum bet sits at the reasonable amount of $/€/£0.20 per spin, with the highest possible wager set with an upper limit of $/€/£100.00 per spin. This vast range of stake options leaves the game relatively open to all players, from high rollers to new gamers.

There aren’t a ton of bonus features within the Book of Gold Classic Slot Game; the game largely revolves around the free spins bonus round. You’ll be able to unlock access to the round by landing at least three Book of Gold symbols. Three symbols will reward you with winnings worth double your stake, four will reward you with a 20 times multiplier, and a full-house of five will leave you enjoying a cash prize worth 200 times your stake – with all options, you’ll get an initial ten free spins.

Before the round begins, one regular symbol will be randomly chosen to become an expanding symbol throughout the free spins. Whenever this chosen symbol lands and there’s the potential for a winning combination, it’ll expand to cover the entire reel. Expanding symbol wins are paid independently, so they don’t necessarily have to be adjacent on a payline to result in a prize.

The Book of Gold Classic Slot Game is a decent game which acts as follow up to Playson’s earlier Book of Gold Double Chance slot. It’s a solid slot with some great winning potential, though we’d have liked more bonus features to have been added to the gameplay as it feels a little slow at times. That said, the free spins round and associated multipliers offer the chance to add significant winnings to your prize pot.