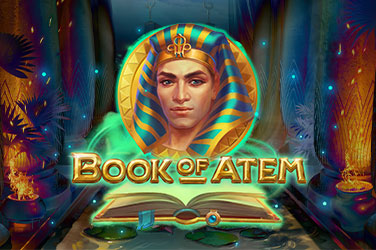 Microgaming and All41 Studios have teamed up to bring players Book of Atem, an ancient Egyptian themed slot with all the go-to symbols that represent this former civilisation. The game offers lucrative multiplier bonuses, ample paylines and a high level of variance that combine to create an exciting gaming experience for those who stay the course.

You may have heard of the game before, but did you know that it is based on one of Egypt’s most famous deities? Atem was a major god in ancient Egyptian culture and had his own set of rituals. He also appears regularly throughout many pyramid texts. Why not give this great slot a try for free right here with CasinoNZ?

The Book of Atem is a terrific game for those who want to experience ancient Egypt, but don’t have an actual time machine. Players are presented with a regulation 5×3 playboard featuring traditional playing card values starting from the lowest value of ‘10’ right through to Aces represented by the letter A. In addition, you also have objects such as lotus flowers and serpents which appear if you’re lucky!

The game is straightforward, with players needing to match three adjacent symbols on one of the ten paylines for them to scoop a prize. Free spin features are also lurking around the corner if they can line up three matching book symbols instead!

You can feel the power of this ancient land with every spin in Book of Atem. The symbols are all meticulously designed and each one has a unique look that is sure to please your eye while you play on its 15 paylines! Along with gambling, there’s also an Egyptian theme song playing throughout gameplay which creates just as much tension for players who want to win big jackpots!

If you’re looking for a game with some of the most exciting features, then this is it! In addition to traditional gameplay where all players are vying to win prizes from matching symbols on their spinning reels, there’s also these awesome books that give free spins when matched. These matches open an additional screen in which your prize is determined by turning pages until landing on one worth 10-25 bonus games and increasing the value of each spin during those rounds as well.

Return to player (RTP) percentages are one of the main factors’ players look for when looking for an online slot to play. Book of Atem has a RTP percentage of around 96.5% making this slot one you must play. It’s also a high variance slot, this means wins may be few and far between, but on average they are much larger when they come.

It’s been said that there is no such thing as a perfect game, but Book of Atem comes close. Set in Ancient Egypt and with plenty to offer history buffs, this online slot has all the tools you need for great playtime including variance and paylines galore!