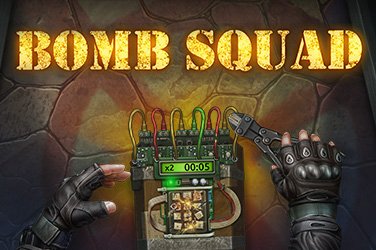 Our Bomb Squad slot game review found that this game is unique compared to many others, but it still provides a number of Bomb Squad bonuses, such as multipliers and a low volatility rate that means rewards can be rather frequent!

Evoplay have provided a slot game that is slightly different to any other. The graphics and visuals used are of a top quality as players will feel as though they are the ones that are in the tricky situation of having to pick the correct wire to cut when trying to defuse the bomb in front of them.

Depending on the game mode that they choose, with Easy, Normal and Hard levels available, players will find that there are 4 wires, 6 wires or 8 wires that they need to try and cut successfully. Players who manage to pick the correct wires will win a prize, whilst those that pick one of the wrong wires will instantly see their game be over.

As such, there are no typical paylines or playing grids available with this game, however, it is still rather fun and simplistic to play and follow.

The main Bomb Squad bonus feature in this game is the multiplier that can be found when correctly predicting the first wire to cut. Those that are playing in the Normal or Hard levels will receive an increasing multiplier that will see each reward increased by a certain amount.

The return to player (RTP) rate of this Bomb Squad slot game stands at 96% and features a low volatility level, therefore, meaning any payout achieved will be quite frequent but have a low value attached to it.

As mentioned at the beginning of this Bomb Squad slot game review, this game from Evoplay is rather unique compared to many other titles available, whilst it also provides a truly immersive gameplay experience as players will feel that they are in the thick of the action.

The multiplier Bomb Squad bonuses on offer for those who pick the right wire successfully in the game modes in which it can be triggered is a nice reward, whilst the fact that 3 different levels can be played means players have a choice to make.

The average RTP rate and low volatility rate mean a number of rewards can be won, which is also another fine reward for diffusing a bomb successfully!