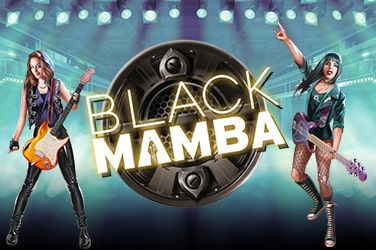 Rock music fans will appreciate all the features of the Black Mamba slot from Play’N GO. This game is perfect for all devices, including mobiles, and has the typical grid format which is favoured by this creator. The game is a cascade slot, with a 5 x 5 grid, and bets can be played from 0.20 up to 100 coins.

Read on to learn more about the Black Mamba slot game.

This slot is based on a little-known Italian rock chick group and has four solo features from band members. With increasing multipliers and a Concert bonus feature alongside a free spins bonus, the Black Mamba slot has all the excitement needed from modern video games.

Base symbols include guitar picks, microphones, and drum sticks, and the band characters of Cecilia, Alexandra and Fred are also featured. The Snake Wild can substitute for any symbols, and Martina the lead singer is the two times multiplier Wild. Horizontal and vertical wins are a feature in the game, and hitting any Martina Wild in wins can add from two to 50 times your stake.

The cascade model is quite common for Play’n GO slots and can increase payouts enormously. As all wins are removed from the reels, more symbols drop-in, and three or more Snake Wilds will increase the multiplier for all new wins. The Multiples Meter increases throughout play and can also trigger the Concert Bonus when completely full.

The Solo features can trigger on a random basis during any base game spins that are non-winners. Different band member Solos include:

The Concert Bonus activates when the meter is full and takes you to another set of reels which consists solely of band character symbols. All win multipliers are carried into this bonus, so big payouts are possible.

Like most Play’n GO games, Black Mamba is high volatility, and it’s quite a simple game to get the hang of. If you start hitting regular cascade wins, you will find this slot can pay out really well, particularly when the Concert and Free Spins hit during gameplay. The chance to grab unlimited multipliers and a potential payout of up to 5,000 times the stake make this a popular game with players. The Black Mamba slot has an RTP of 96.5%.