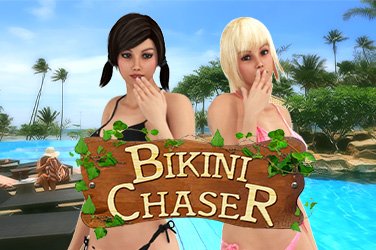 This game was introduced by SimplePlay, a China based company. It has appealing and sexy graphics and the slot machines tend to have moved on from the need to bare skin to draw users in, and the label intends to keep on making beautiful online titles, which means providing beautiful 3D animated girls.

This game has a unique theme and the deeper you dig in the game the more rewards can be found like a lot of perky bums and bouncing breasts, before you get to the heart of the gameplay. To play this you have to be prepared for all the sex appeal.

When you make a winning combination of up to five of the cameras, he receives x3 or x50 of his initial bet, depending on the combo he has secured. Also, if he’s lined up at least three of the symbols, he’ll enter into the free games round,which is considered the main feature of the reels. Once he is inside the rounds, he’ll get to select between two unique wild icons, both of which are busty girls.

Bikini Chaser is played on 5 reels and 30 paylines. The regular symbols you can find on the reels include six playing card symbols in bright colors, views of the sexy body parts of the bikini girls, and two figures of bikini girls. There is an image where you can see both girls, and this is the wild symbol which substitutes for all missing basic symbols in order to help players create winning lines.

Some of the features and bonuses provided in this game are:

Double Feature: The special wilds don’t normally show up during the free games, and when they do they can only do so on the third reel. Therefore this is a tough extra to unlock no matter your experience of online slots. The girl you pick is your special symbol, and so when she lands on the third reel the unlimited spin mode starts granting you unlimited spins . However, should you get the other girl showing up for the party uninvited, the mode will switch to that of a countdown clock that you’re now limited to the number of extra games you play.

Big Money: This day out at the beach isn’t just shaping up to look good, it also has the potential to deliver some serious cash into our bank accounts. For that to happen though, you’ll need to trigger one of the three progressive jackpots, a feat that only happens at random. Higher the risk, higher the rewards.The figures given are very impressive, with the top prize hitting 1,651,000 when we played.

Titillating: Thanks to the efforts of SimplePlay, you can go from one stimulating interface to the next, experiencing all the elements you love every time. The reason for this is that the gameplay across most of their slots is consistent, and so you won’t get a deviation from their normal setup. What this means is that slots like North South Lions have appeal for its depth of gameplay, rather than their inclusion of sexy women.

If the bettor gets lucky with the features then these busty women could assist the bettor in winning upto 50 times their stake.

With appealing and sexy graphics and fun bonuses, Bikini Chaser slot game is recommended to those who enjoy a bit of light relief in their game imagery.