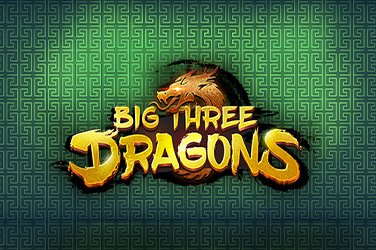 Big Three Dragons is a classic slot game with stunning visual elements and astounding illustrations by Simple Play. The theme of the game revolves around Asia and the Far East which have been observed to be immensely popular among the players.

Additionally, the subtle addition of Chinese mythology and Mah-jong to the game makes it distinct in its own way. The game can be easily accessed from mobile phones and desktops.

The game has a 1 line 3×3 reel slot which gives a payout with 1 or 2 winning symbols. 3,000 coins can be won by users in one single round alone.

The game features three reels and one payline. Punters can land seven regular symbols. Three matching symbols on the payline can help users earn their winning prize. The symbols might resemble the tiles from mah-jong games. The game offers three levels of bets and without any doubt, the highest prizes can be won when the users are playing with the highest bet.

Keeping aside all the good things that the game has to offer, the game may not be on the top list of the punters and gamers when it comes to the animation and interface of the game as it fails to offer virtual realities or three-dimensional animations in the changing times.

It is a high-scoring, each piece of three dragon tiles i.e. Red, Green and White should be users’ first option for their BIG WIN. The game has a high-scoring mix in mah-jong. Gathering any set of tiles can prove victorious for the player.

The game offers progressive jackpot prizes which appear randomly. A wild symbol can also be found, which is counted as the rest of the symbols in the game. A combination of a wild symbol and the lowest paying symbol will earn users their cash rewards.

With quite a basic look Big Three Dragons may have not be players best option when it comes to slot games but it with the progressive jackpot and a notable RTP of 95.92% big wins are possible.