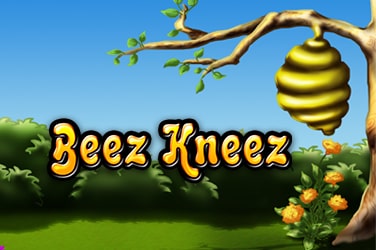 It’s always good to find a new theme in the modern slots world, and Beez Kneez by Australian games developer Eyecon certainly feels like a breath of fresh air.

Unlike some Eyecon games, it offers a striking visual impression that makes a significant impact.

This is a 5-reel slot game that offers up to 25 pay-lines, with a cartoon theme set around the world of bees and other insects. Eyecon have pulled out all of the stops when it comes to the visual effects. Beez Kneez features excellent graphics and attention to detail that makes it a pleasure to look at.

The reels are set against a picturesque image of the natural world, complete with blue sky, white clouds and green leaves, while towards the right is a beehive hanging from a tree. The bright yellow reels, too, have been designed to support the theme, and there is an entertaining soundtrack.

The symbols are appropriately designed and feature Honey Bees, Dragonflies, Apples, Mushrooms, Butterflies, Baby Bees, Flowers and Hives. Most of the winning payouts are formed by lining up at least three of the aforementioned symbols, but some will pay out if you just match two. The most valuable symbols is the Queen Bee, and there are also two irregular symbols, in the form of a Worker Bee, which represents the Scatter and a Cocoon, which is the game’s Wild.

Playable on mobile devices, as well as desktop, this is a high variance slot game with an RTP of 95.3% which is around the average for the industry. You can Available across all devices, this slot is classed as high variance with a slightly disappointing RTP of 95.3%, however, it does include some useful player features, including the autoplay option, which gives you the choice of choosing 10, 20 or 100 automatic spins.

Beez Kneez is not overloaded with bonuses, but this game does offer some handy additional game features that add interest and the potential of bigger wins.

The first bonus to mention is the Prize Pick. This feature is triggered when you land at least three of the Scatter icons across the reels. You will have the chance of picking a prize which can reach as high as a x100 multiplier of your original bet, with the number of available picks determined by the array of Scatters in the original combinations.

There is also a popular Free Games bonus which is triggered if you can land three of the Cocoon symbols on the reels. Depending on the number of Cocoons you land, this will give you between 15 and 25 Free Spins, and all prizes are trebled during these spins. It is even possible to retrigger this Free Spin feature up to 15 times, for even bigger wins.

Beez Kneez may have a slightly disappointing RTP, but there’s no doubt this is a beautifully realised game, offering a fun and friendly playing experience, and the bonus games add just enough variety to keep things interesting.