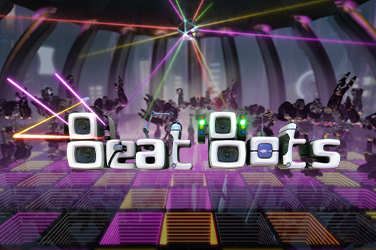 With an upbeat, bizarre, futuristic theme built on a megacity full of robots, there can only be one explanation behind it – the pokie makers Saucify.

In one of their most intriguing products to date they’ve seemingly thrown everything against the wall in an attempt to see what sticks, which has led to the end result of our Beat Bots slot game review.

We open up with a 5×3 reel layout that we’d actually argue could do a better job of displaying the symbols on the board. There are 40 paylines to work with alongside a whole host of themed symbols including a parade of working robots such as construction workers, postmen, crossing guards and office workers.

The return to player (RTP) percentage is always going to be viewed as an important piece of the slot puzzle and that’ll be true for some who decide to play Beat Bots. The reported RTP for this one comes in at 96% and while that’s below the usual industry average, the fact it has medium volatility should be seen as a good thing, if only because smaller yet more consistent wins are possible.

The visual side of things is a little bit gritty, as we’ve come to expect with Saucify, and yet even though the gameplay is rigid we really like the detail that has gone into some of the design work. It’s different, and a bit creepy at times, but that’s what you’ll get with innovation in the slot business.

The actual Beat Bots logo is the wild symbol that can replace all other symbols outside of the scatter, which is the DJ robot. If he appears three or more times during the base game then he will unlock some free spins.

The symbols will change throughout this feature as the robots go on a crazy night out with an extra wild being added into the reels, as the DJ symbol becomes a wild too. From there, you can really improve your winnings even if you can’t retrigger the round.

Our Beat Bots slot game review has come to an end and while it may be a bit out there and somewhat slow at points, we can appreciate what Saucify was trying to do.

They wanted to diversify their range of products with the kind of theming that really does make it stand out amongst the crowd. Some won’t appreciate that, but we’d definitely suggest giving it a go – if only to see how wacky it really is.